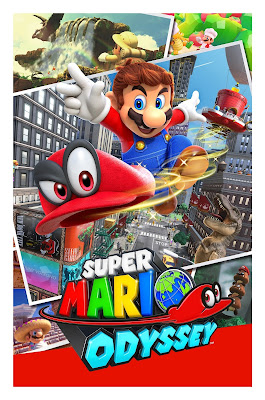 After over six months of hype, Mario Odyssey is finally out, and I am once again absorbed into another massive world built by Nintendo’s crew of mad scientists. Over the course of the game’s release weekend, I have put about 15 hours into the game and have already collected 222 moons (out of 800). Here are my impressions of Mario Odyssey so far: While Zelda: Breath of the Wild represented a drastic departure from the series' traditional formula, Mario Odyssey feels more like a new blend of mostly familiar elements. However, as one would expect from a Mario game, the execution is top-notch and every part of the game that I've seen so far is simply imbued with the spirit of fun.

Posted by Capsulejay at 8:36 PM