The third and final game in my #HorrorGameOct lineup is one that I played through with my wife rather than on Twitch. Little Nightmares is a horror puzzle platformer that was originally released on PC, Xbox One, and PlayStation 4 in April 2017. The 2018 Switch version that my wife and I played featured the main campaign, "Six's Story", as well as the DLC campaign, "The Kid's Story".

Each of the two campaigns follows a different child's path through The Maw, a giant cruise ship full of grotesque semi-human cannibalistic creatures, as the kids attempt to escape before they wind up as entrees in the buffet. This unique premise and the twisted and unsettling imagery that come with it are the game's biggest strength. The creatures pursuing the young heroes are creatively designed and also deeply disturbing to look at. The Maw features dark industrial areas in the underbelly of the ship as well the passenger accommodations with banquet halls and giant furnishings. It all comes together in an appropriately nightmarish visual package that feels like a fusion of the darkest parts of Nightmare Before Christmas and Spirited Away.

While the premise and sense of style are very distinct, the story that Little Nightmares tells is minimalist. Outside of the game's conclusion, there are no cut scenes, dialog, or text within the game. I was initially disappointed by this since the game's trailer make it look like a narrative-driven game, but after a while I adjusted to the subtle and purely visual form of story telling the game was using. What's there is mysterious but very bare bones.

The gameplay of Little Nightmares is very simple. There's no combat; all enemy encounters are resolved by either speed or stealth. In the quiet moments, there are basic environmental puzzles to solve and light platforming. Most of this works out reasonably well, but there were a couple of persistent sources of frustration throughout. Despite the character's limited capabilities, the controls were cumbersome. The main issue was that the right trigger needs to be held any time the character is carrying an object, climbing ladders, or pulling themself up a ledge. After an hour or so of play, my right index finger would get sore since I had to be holding down the trigger most of the time. The other issue is that the camera has very limited movement, which meant that I had several occasions where I would miss a jump and fall to my death due to bad camera angles throwing off my depth perception.

Control and camera hangups aside, we encountered a couple of technical issues while playing Little Nightmares on Nintendo Switch. The most glaring of which is likely a Switch-specific problem: painfully long load times. The stealth and platforming sections of the game often involved some trial and error, with mistakes leading to instant death. These deaths were punished by having to wait up to a full minute for the game to reload the last checkpoint. This was very discouraging during the tougher parts of the campaign. The other technical issue was more general; glitches in the game's physics and collision would sometimes cause the player character or enemies to get snagged on corners or doorways. On a few occasions this would happen at an inopportune moment, and then we were staring at a loading screen once again.

For my wife and I, we had enough fun and spooky moments with Little Nightmares that we willing to tolerate the technical and design issues that occasionally got in the way. Little Nightmares is unique enough from an artistic standpoint to be worthwhile for fans of the weird and creepy but is probably not mechanically sound enough to please those who come to it purely for platforming or stealth gameplay.

Note: This review is specific to the Nintendo Switch version of the game. It’s possible that the PC game addresses some of the issues I had with this game by having faster load times and reconfigurable controls.

Posted by Capsulejay at 11:32 PM No comments:

Bloodstained Curse of the Moon Review

After finishing off Momodora last week, I decided to keep the #HorrorGameOct train rolling and jump straight into another Castlevania-inspired 2D platformer, Bloodstained Curse of the Moon. Since this is short game, I finished it off in a single streaming session. Both the stream and the game itself were a total blast! Now that I've laid the demon king to rest, here's my review:

Background
Bloodstained Curse of the Moon is an NES-style 2D platformer from developer Inti Creates. This game was released earlier this year as a prequel to the upcoming Bloodstained Ritual of the Night. Both of these titles come from former Castlevania director, Koji Igarashi, with Curse of the Moon being based on the NES Castlevania titles, and Ritual of the Night being based on the PS1 and Gameboy Advance entries of the series. Wearing its inspiration on its sleeve, Curse of the Moon, features monster-slaying heroes progressing through spooky linear environments such as haunted forests and vampires’ castles.

Cons
As someone who has been a fan of the Castlevania series for a long time, I came to this game with a discerning eye and sense of cautious optimism. I was thrilled by the result! Bloodstained Curse of the Moon is an incredibly effective spiritual successor to Konami's horror platformer series that delighted an old-school fan like me and will probably also offer a fun, but manageable, challenge to newcomers as well. 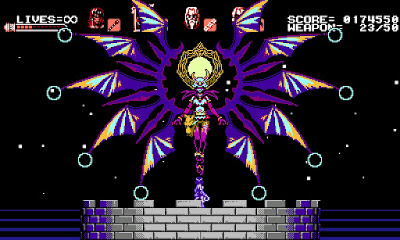 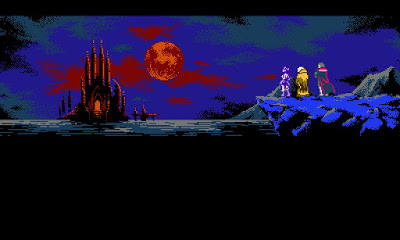 Posted by Capsulejay at 7:04 AM No comments:

Momodora Reverie Under the Moonlight Review

As I had announced last week, I played through Momodora Reverie Under the Moonlight on Twitch as part of my #HorrorGameOct streaming series. Since it was a relatively short game, I ended up finishing it in two streaming sessions! Here’s my review of the game, now that I can put ot in the “completed” page of my backlog.

Overview
Momodora Reverie Under the Moonlight is an indie Metroidvania game that was originally released on PC in 2016. The game follows a priestess tasked with snuffing out the source of a curse that has caused the kingdom to be plagued by witches, skeletons, ghosts, and other Halloween-appropriate baddies. Though Reverie Under the Moonlight is the fourth installment of the Momodora series, it represents the point at which the series gained mainstream recognition and is thus my first exposure to the series.

While Momodora Reverie Under the Moonlight doesn't do much to deviate from the formula established by similar games that came before it, I enjoyed my time with it quite a bit thanks to its strong mechanics and presentation. It’s generally a solid-by-the-numbers Metroidvania that'll please fans of the genre but won’t win over holdouts.

Disclaimer: As of this week, Tales from the Backlog is no longer participating in the Amazon Affiliates program. I'll be sure to include a new disclaimer if I enter into a new advertising/sponsorship arrangement in the future. Any Amazon links in older posts will still work for shopping purposes but no longer serve as a revenue source for this blog. 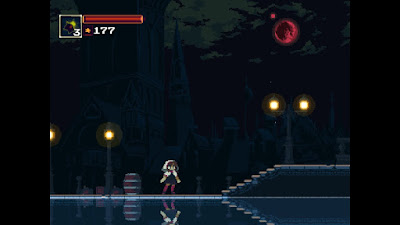 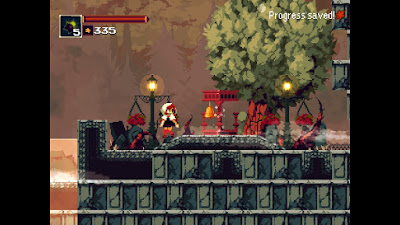 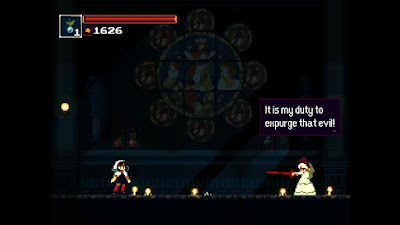 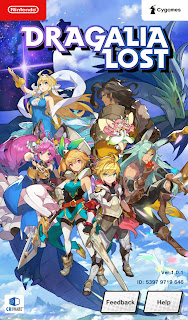 While I’m not the biggest mobile gamer, whenever there’s the opportunity to play something published by Nintendo (legally) on my phone, I’m sure to give it a shot. Their newest mobile title, Dragalia Lost, is an interesting one in that it’s not adapted from an existing Nintendo franchise, but is a new IP they created in collaboration with CyGames Studios (of GranBlue Fantasy and Rage of Bahamut fame). So far, I’ve been able to put a few hours into the game, which feels like just scratching the surface, but that's been enough for me to put together some early impressions.

Overview
Dragalia Lost is a free-to-play fantasy action RPG. The campaign consists of alternating visual novel-style story scenes and short overhead dungeon sequences in which the player fights a few enemies, gathers some treasure, and then fights a boss (like a very simplified version of Zelda or Ys). The player controls a party of four characters, most of which have the ability to transform into powerful dragons for a brief period of time. Dragalia Lost makes its money via microtransactions, primarily in the form of randomly drawn items, characters, and dragons (i.e. a “gachapon” or “loot crate” mechanic).

Observations
Despite some issues that are prevalent in free-to-play mobile games in general, Dragalia Lost has really impressed me. Its combination of fun characters, bopping sound track, and decent gameplay will mean that it'll probably be my go-to phone time waster (other than Twitter) for at least the next few weeks. Also, knowing that many other Cygames properties have been adapted into other media, primarily anime, I'm curious to see what fruit their partnership with Nintendo may bare in the future.

Since this post is about a free game, there's nothing to topical to advertise. However, if you'd like to pick up a new game while also supporting this blog, you can do so via this affiliate link: Amazon Video Games 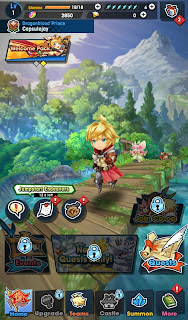 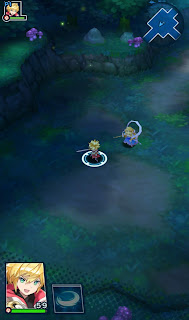 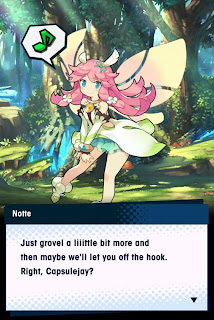 Posted by Capsulejay at 7:10 AM No comments: 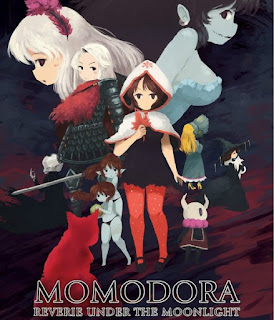 Final Fantasy 5, Ys, Beyond Oasis, and Battle Chef Brigade... I've been on a long streak of RPGs on my Twitch stream and it's time to change things up. Thus, for the rest of the month of October, I'll be switching to one of my other favorite genres: 2D platformers! On top of that, this month is #HorrorGameOct, so I'll be focusing on platformers with a spooky Halloween theme. (If you'd like to know more about #HorrorGameOct, check out this post on the Chic Pixel blog).

The first game in the line-up will be Momodora: Reverie Under the Moonlight, a Metroidvania game set in a world of monsters, witches, and curses. This game has been on my radar for a while for its great pixel art, so I'm really looking forward to digging into it. If I manage to finish Momodora before the month is over, the next game in the lineup will likely be Bloodstained Curse of the Moon, a spiritual successor to the 8-bit Castlevania games.

Streams will be on my Twitch channel on Tuesday nights from 8 - 11 PM ET. I hope you'll look forward to joining me for some spooky platforming fun!

If you'd like to pick up a spooky game of your own while also supporting this blog, you can do so via this affiliate link: Amazon Video Games
Posted by Capsulejay at 12:43 PM No comments: