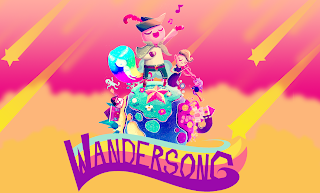 While I've always enjoyed short sessions of traditional rhythm games like Dance Dance Revolution, especially in arcades, it's not a genre that I tend to engage with at home. However, games of other genres that incorporate music into their gameplay are something that I can get into in any context. That's where Wandersong comes in. This adorable-looking game came strongly recommended from IGN's Tom Marks and my streamer pal, BogusMeatFactory; with two ringing endorsements from people with such unique tastes in games, I had to give Wandersong a shot.
Overview:
Wandersong is a music-themed adventure game. It tells the story of a bard on a quest to learn the scattered pieces of the Earth Song; a magical piece of music believed to be capable of staving off the apocalypse. The bard's primary ability is to sing 8 different notes based on the direction the player tilts the right thumbstick (the number pad or mouse is used if playing without a controller). This review is based on the PC version of the game, which I played via Xbox Game Pass.
Observations:
I often divide my observations in reviews into pros and cons, but when it comes to Wandersong, there is really nothing bad I can say about it. This game's graphics, music, writing, and gameplay all come together in a delightful package that I can comfortably recommend to just about anyone.
Score: ⭐⭐⭐⭐⭐
Completion Time: About 14 hours
Note: This post is part of the Chic-Pixel community's #MusicGameMay event. For more info and their full list of events, check out this page: Community Game-Along Master List 2020 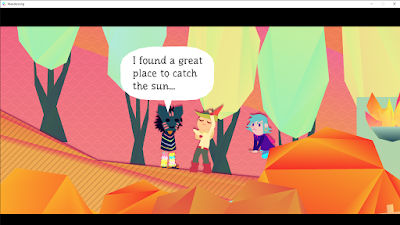 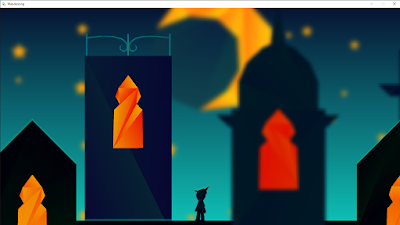 Posted by Capsulejay at 9:48 PM No comments: 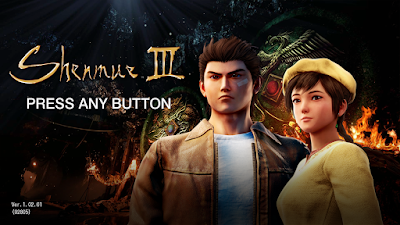 Considering the unusual circumstances behind Shenmue 3, a surprise modern sequel to a pair of cult Dreamcast games from nearly 20 years ago, and all nostalgia and baggage that comes with it, this "review" is going to be a bit different than my usual write-ups... more like a spoiler-free review, analysis, and retrospective all rolled into one. That being said, I hope you're along for the ride.

Background
When I was a teenager, I got absolutely absorbed into the Shenmue games. In fact, I got Shenmue 2 right before spring break and I'm pretty sure that I spent the subsequent week off from school doing nothing but exploring virtual 1980s Hong Kong with Ryo, Joy, Ren, and the rest of the crew. It probably wasn't the healthiest way for a young man to be spending his vacation, but it was a magical experience that I don't think I'll ever forget. However, having the second game end on a cliffhanger that would seemingly never be resolved, was quite painful. Thus, when the Kickstarter campaign for Shenmue 3 was announced at E3 2015, I signed up to back it immediately; in fact, I'm pretty sure I created a Kickstarter account specifically so I could secure a copy of Shenmue 3 for myself.

Now that the game has finally come out and I've played through it, my feelings on it are incredibly mixed.

Game Overview
Shenmue 3 continues directly from the events of Shenmue 2. The Shenmue games follow Ryo, a Japanese teen martial arts student, who is on a quest to find the man that murdered his father and exact revenge. In Shenmue 3, Ryo visits two different cities in China where he gathers clues to pick up the trail of his father's killer, Lan-Di. There is also a third smaller area that serves primarily as a location for the game's conclusion. Essentially, each of these areas is used to divide the game into three acts. In addition, to gathering clues, the game features occasional combat in the style of a 3D fighting game (similar to Virtua Fighter) and a variety of minigames. Shenmue 3 was released on PS4 and PC; this blog post is based on the PC version.

Coming back to the Shenmue franchise caused me to realize many things about these games that I was never quite able to articulate when I was younger. Shenmue is often miscategorized as an "action RPG," and this third game really cemented in my mind what a miscategorization that is. Shenmue's combination of gameplay elements and themes make it much more complicated to pin down... so here it is in Venn diagram form: 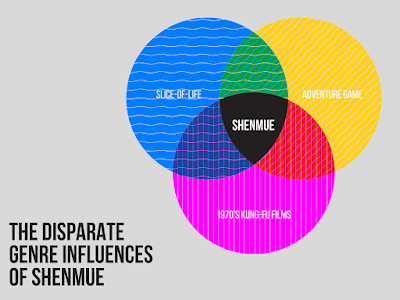 Now that I've gotten all that explanation out of the way, let's get into how I, as a fan of the series, felt that Shenmue 3 managed to package all these elements together.

Observations - Shenmue 3 as Compared with its Predecessors
Being a Kickstarter-backed revival of a cult video game series, Shenmue 3 was inevitably going to be a nostalgia-focused work. The rigidity with which it adheres to what was established by the previous games works both for and against it.


Observations - Shenmue 3's Unique Content
While in many ways, it's impossible to separate Shenmue 3 from the nostalgic background of the franchise, it's still its own game. Like everything else in Shenmue 3, the new content is also a mixed bag.


As a long time fan of the series who has been waiting for the next installment of the Shenmue series for the majority of his life, playing Shenmue 3 was paradoxically a joyous and disappointing experience. I was delighted to see that much of what made me love Shenmue is still here; for a big fan like me, that alone was enough to make the money and time I spent on this game feel worthwhile. However, there's a difference between something being worthwhile and being satisfying. Shenmue 3 doesn't do very much to bring the series forward in terms of game design or narrative, it is simply content to just stoke the fires in fans' hearts and serve as a demonstration that a new Shenmue game can still be made. As one of those fans, this is something I can accept this time, but it's a card the developer can only play once.

I typically like to end a review with a recommendation; in this case, the recommendation is contingent on your background with the series:
Score: ⭐⭐⭐
Completion Time: About 42 hours

Thoughts on the Shenmue Series Going Forward
A little bit after I started writing this post, I read a news article about how the investors that made Shenmue 3's development possible were surprised that Shenmue hasn't turned out to be a mass-market AAA franchise (i.e. this installment primarily only sold well to existing fans and wasn't especially profitable). To be honest, I don't really know what investors were expecting.

I love Shenmue, warts and all, but I'm not sure there's a future for it. In its current form, it's too expensive and ambitious for the limited audience it has. The only paths forward I can see would involve making drastic changes to pull in more players and investors, or it would have to scope down massively to fit a more traditional indie budget in an attempt to deliver a satisfying resolution to the diehard fans as efficiently as possible. The risk with either route is that it could lead to a result that just wouldn't feel like Shenmue any more. If a fourth entry ever gets made, there is going to be a tremendous amount of pressure on it; based on Shenmue 3, it's unclear if the series director, Yu Suzuki, and company are up to the task.