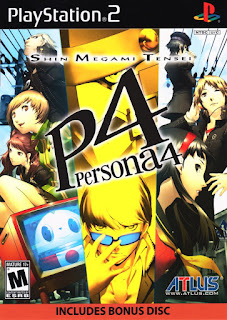 Compared to last year, 2018’s release calendar has been fairly light. While some gamers might be
lamenting this, I’ve found it has been an excellent opportunity to go back and check out some titles from prior years that I missed. Thus, I’m jumped right into tackling yet another “gaming shame”, the Megami Tensei franchise. Except for two spinoff games, Tokyo Mirage Sessions, and Shin Megami Tensei Synchronicity Prologue, I haven’t gotten the chance to get into Atlus’s hugely popular RPG series. A friend was nice enough to lend me his copy of Persona 4 for PlayStation 2 back in April and it's taken me a while to finish the game and put together my thoughts.

Game overview:
Persona 4 is an RPG in which the protagonist and his friends must investigate a series of grisly
supernatural murders that have been taking place in their town. The wrinkle is that the investigators are all high school students and must juggle their school and social lives in addition to gathering clues, fighting villains, and rescuing potential victims.

Observations:
Overall, I found that the gameplay of Persona 4 was interesting at first but lost its luster as the game went on; it was the strong characters and compelling central narrative that kept me on board for the 70+ hour campaign. I'm really glad I got to experience this landmark game and I know it will stick with me for quite some time. That being said, the investment of time and mental/emotional energy required to tackle a game as large and deep as this is something that I'm only prepared to handle occasionally. In all likelihood, it will be quite some time before I'm ready to dive into another Persona title.

If you would like to pick up a copy of this game while also supporting this blog, check out the Amazon affiliate links below:
Persona 4 - PS2
Persona 4 Golden - PS Vita

Posted by Capsulejay at 10:59 PM No comments:

After having so much fun with my last Ys streaming series, "Ease Into Ys", I've decided to delve even deeper into Falcom's classic action RPG series with Ys Origin. This game is a prequel to Ys 1 & 2, but according to the series experts at Digital Emelas, it is said to be best played after the first two installments of the series. If you'd like to get caught up on what happened in those games, I'd suggest this YouTube video:


Unlike the other Ys games, instead of playing as the series protagonist, Adol, Ys Origin has three playable characters with their own story lines. At this point, I've already played through the first character's quest offline in order to get familiarity with the game and will be starting the second character's quest on my Twitch channel. Ys Origin is much more action-oriented than other RPGs I've played, even when compared to other Ys games, so it should make for a pretty briskly-paced stream.

If you'd like to join me on my journey up the Devil's Tower in Ys Origin, be sure to tune into my "Ease Further Into Ys" stream on my Twitch channel every Tuesday, starting tonight (Jul-17) at 8PM EDT!

This game has an awesome soundtrack! If you'd like to give it a listen while also supporting this blog, check it out via this Amazon Affiliate link: Ys Origin Soundtrack
Posted by Capsulejay at 9:44 PM No comments: 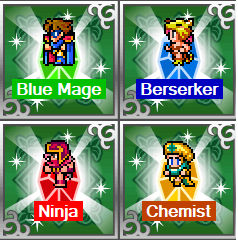 Last night, my second Four Job Fiesta campaign came to a close and it was a wild ride! Partly because of my increased familiarity with the game, and partly due to the classes I rolled, this Fiesta went much more smoothly than the last. Here are the highlights:

Overall, this was a really fun campaign that encouraged me to use skills and classes that I had previously never even considered! I also finished the campaign faster and at a lower level than last year: 35 hours and at level 42. Regarding the charity side, between my contributions and those from Twitch viewers, $85 (US) went to Child's Play! I want to give a big thanks to everyone who watched or donated this year, and I'm already looking forward to next year's campaign!
Posted by Capsulejay at 10:47 PM No comments: