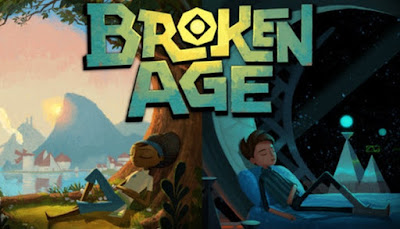 My wife and I recently finished playing through Doubefine’s crowdfunded point-and-click adventure game, Broken Age. If you’ve ever played other adventure games directed by Tim Schafer (Day of the Tentacle, Monkey Island, Grim Fandango, etc), you probably already know what to expect from Broken Age. For those unfamiliar, the game consists exploring the environment as one of two different playable characters, collecting miscellaneous junk used to solve puzzles, and having snarky dialog with NPCs.


The game starts out strong by introducing you to its protagonists, Vela and Shay: two reasonable people trapped in two very different, but equally, absurd worlds. The game’s visual style, which looks like moving children’s book illustrations, gives the world and characters plenty of personality while still making items and objectives easy to discern. Snappy dialog, featuring the signature LucasArts/Doublefine sense of humor, further adds to the charm of the game world.

Pretty pictures and quirky characters aside, Broken Age is a game that’s all about puzzles. The puzzles are all initially of the pretty straight-forward “use item X on environmental object Y” variety and gradually increase in difficulty and obscurity throughout the game. This is all part of the standard point-and-click progression that one would expect from a throwback adventure from Tim Schafer. In the second half of the game, a different type of puzzle is introduced in which long sequences of actions must be completed in a very specific order for the game to progress. This is where the game makes the transition from clever, but occasionally arcane, to tedious and frustrating. Many of sequential puzzles require traversing the map in-between steps and switching between characters, with a single incorrect step resetting the entire puzzle. Compounding this issue, the game often isn’t particularly good at conveying what you did wrong. As a result, for the last handful of puzzles, my wife and I resorted to using a guide to spare ourselves the aggravation of using trial and error to finish the game.

Overall, Broken Age is an adventure game with a strong sense of style and personality but suffers from gameplay mechanics that fall apart in the second half of the game and make the game feel like it’s dragging on. I expect that players that are already fans of Tim Schafer’s work will find enough to like here to make the game worth playing, but newcomers will probably find it too discouraging.