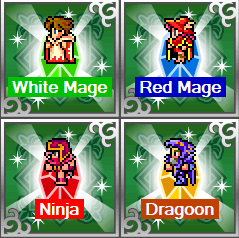 In the second week of the Four Job Fiesta, I managed to make it through the Earth crystal and unlock my fourth job: Dragoon! While this is one of the more generic classes that I could've unlocked, it may end up making my life my easier as I finally have access to a character that can equip heavy armor and shields. Also, the "Jump" command is useful for keeping a character out of harm's way when a boss uses an attack that targets the whole party.

Now that I know what my final party composition will be, it's just a matter of shuffling the classes around to give each character a complementary set of skills. For the time being, I'm having the two Farises (i.e. Bartz and Faris) focus on physical attacks as Ninja and Dragoon, and having Lenna and Galuf stick to magic with White Mage and Red Mage. There are some interesting possibilities going forward such as having a Dragoon who can hold a lance in each hand by using the Ninja's dual-wielding ability.

Other than unlocking my last job, the rest of Week 2 was just about tackling the succession of bosses standing in the way before entering World 2.  I made it through but found that often times my whole party was getting wiped out except for the Dragoon (thanks to having a shield and jumping). Thus I did some grinding once I entered World 2 and am now ready to press on through the tougher dungeons ahead.

Posted by Capsulejay at 6:59 PM