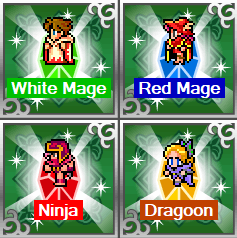 Now that I have all four of my character classes and my party structure is fully established, Week 3 was all about traversing World 2 and taking on several challenging bosses. In general, World 2 seems to represent a bit of a difficulty spike that required more strategizing, but occasionally some grinding as well. A big part of this is finding a roll for each of my classes to fill. So far I've observed the following:
Before this week is over, I'll be working my way through World 3 and taking on some even tougher enemies. From a character building perspective, this is where things will get really interesting as each character will have mastered at least one class, so there will be a lot of potential for mixing and matching different abilities. I'm definitely looking forward to experimenting with unusual combinations that I never would of thought of outside of the Four Job Fiesta setting!

As an additional note, at the time of writing, the Fiesta has raised over $17,000 for Child's Play Charity; we're less than $1000 away from this year's goal! Thanks so much to everyone that has donated, and if you haven't donated yet, there's still plenty of time to make a contribution!
Posted by Capsulejay at 12:12 AM