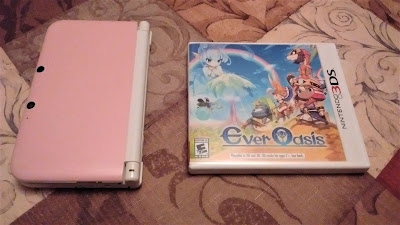 In addition to Final Fantasy 5, my other game for #JRPGJuly is Ever Oasis for 3DS. During last year’s otherwise Zelda-dominated E3, the announcement of Ever Oasis on the Tree House Live stream was a pleasant surprise. Based on the gameplay demonstrated on the stream and the pedigree of the director, Koichi Ishii of Secret of Mana* fame, I knew this had the makings of a game that would have me returning to 3DS after the release of the Switch. Now that I’m about a third of the way through the game, here are some thoughts on what I’ve played so far:
With Final Fantasy 5 currently taking up my primary gaming slot, Ever Oasis has been working out really nicely as my side game (i.e. lunch breaks and before bed). Like with many 3DS games, I’m not sure I’d want to have long gaming sessions with it, but I do find myself tempted to extend my lunch breaks and stay up a little later.


* I've never played Secret of Mana, but I know it's considered one of the all-time great action RPGs. I'm planning on getting to it as part of my "Gaming Shames" project.
Posted by Capsulejay at 8:00 AM