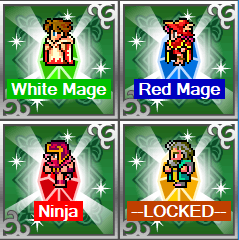 I’m one week into my Four Job Fiesta campaign and am having a total blast. So far I’ve unlocked three of my four classes and have hosted four Twitch streams. I’m also proud to announce that to date, the Four Job Fiesta has already raised over $14,600 for Child’s Play!

Here’s a recap of my campaign so far:

For starters, I want to give a special thanks to Data_Error for placing the winning bid in my character-naming auction. He elected to change Bartz’s name to Faris… and thus I now have two characters named Faris in my party. Thankfully, in the PC version of Final Fantasy 5, character portraits are displayed during dialog, so it’s usually not too confusing to figure out which Faris is speaking. However, in some cases, there are text-only character status messages that take some context clues to figure out.

At the Wind Crystal, the job I unlocked was White Mage. This made for some slow going initially as my characters had very limited offensive capabilities, causing some boss battles to take up 30 minutes to slowly chip away at the boss’s HP. On the bright side, one of the dungeons I went through was filled with undead enemies and I was able to steamroll them with healing spells.

At the Water Crystal, I was really hoping for some sort of class with heavy-hitting physical attacks… so of course what I ended up getting was Red Mage. While not ideal, at least this allowed me the ability to equip swords and do a small but respectable amount of physical damage. The real boon here, however, was being able to use a technique called “rod breaking”. Rod breaking (which I just learned about recently) allows my Red Mages to sacrifice one of their rod weapons in order to cast level 3 black magic (e.g. break a fire rod to cast level 3 fire). This early in the game, a level 3 spell is devastatingly powerful and there have been a few bosses I’ve been able to annihilate in only a few turns using this technique.

I closed out my first week of the Fiesta by reaching the Fire Crystal, which is where I finally unlocked a class that can do some real physical damage: Ninja. This is a class I don’t have much experience with, but I was happy to find that they can hold a weapon in each hand. This means that Bartz (aka “first Faris”) is now doing over 300 damage per turn as opposed to 150 as a Red Mage or 60 as a White Mage. I’m definitely looking forward to experimenting more with weapon combinations using this class as my run continues.

While the classes I’ve unlocked haven’t always been the easiest to use or the most ideal, I’ve really been appreciating how they’ve caused me to come up with completely different strategies from those I used when I originally played Final Fantasy 5. For my fourth class, I’m hoping to get something really outlandish so that I get to learn how to play a completely unfamiliar class.
Posted by Capsulejay at 7:45 PM