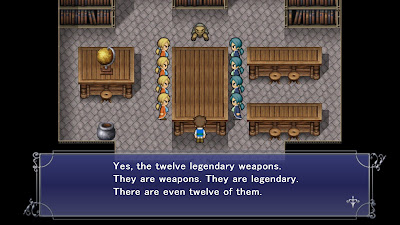 Now that I'm firmly into World 3, preparing my crew for the final push is the name of the game. Most of my characters have all mastered their original jobs and have moved on to new ones. After some experimentation, here's what I've come up with for my team:
In my next play session, I'll be acquiring the first few legendary weapons. While Holy Lance and Assassin's Dagger are pretty clear choices for my first two draws, for the third it's a tough call between Ninja Blade or one of the rods/staves for my mages.
Posted by Capsulejay at 7:28 PM