Lately I've found that playing demos is a great way to stay abreast of new releases even while buried deep in lengthy backlog titles like Final Fantasy XII. To kick-off my "Demo Hotness" series of posts, I decided to go a bit outside of my element with Style Savvy Fashion Forward. 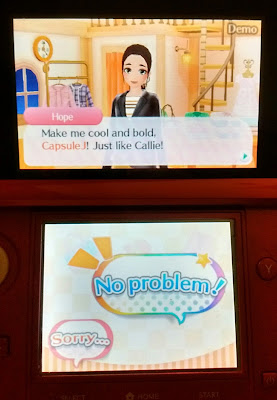 Style Savvy is a series of simulation/role-playing games about the world of fashion. The gameplay combines some light business management and puzzle-solving with a virtual dollhouse of sorts. In this demo, the player character is a new arrival in town and immediately tasked with the bizarre first job of being a fashion consultant to a stalker. Yes, you read that right, your first client is a woman who spends her time obsessing over and spying on a local celebrity and has become fixated on transforming herself to look exactly like her idol. The player's job is to accompany this client to clothing stores, make-up boutiques, and hair salons helping her make the best fashion choices (within her budget) in order to achieve her somewhat creepy dream. This scenario functions very well as a demo/tutorial since the player always has a clear template (a photo of the celebrity) to reference when making clothing, hair, and make-up selections. It's also inferred that at some point in the full game's plot there will probably be a moral of the story about the importance of individuality and self-expression, which is a nice little message for the younger players that this game is most-likely targeting. After the first chapter of this stalker scenario, the demo wraps up by giving the player a sampling of new clients whose style and budgetary requirements need to be met.

While I'm not sure that the full game would hold my interest the whole way through, playing this demo was certainly an enlightening experience. As someone who doesn't know very much about women's fashion, there were a lot of concepts and terminology that I had to figure out as I went along. I also appreciated that while the clients' requirements were generally pretty strict, there was always a wide variety of possible solutions (i.e. outfit suggestions) that would satisfy them, thus allowing the player a considerable range of creative freedom. This demo also provided me with some new perspective regarding gender in videogames: While the player can design their own character, there is no gender selection option; the protagonist of Style Savvy must be female. Also, all NPCs, at least in the demo, are women. I've never encountered this situation before, but maybe now, I've had just the smallest taste of what female gamers saw when playing many of the male-centric games of years past.
Posted by Capsulejay at 11:29 PM