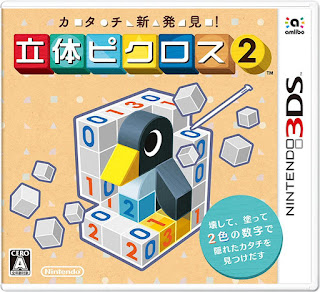 After all the praise that's been heaped on the original Picross 3D over the years, and all the hype leading up to Round 2, I figured I'd take a little time to see what all the fuss is about. While I've never played a 3D Picross game, I do have some experience with traditional 2D Picross puzzles.

Here's a quick primer for those unfamiliar: a basic (2D) Picross puzzle consists of a grid empty squares with numbers marked at the ends of each column and row. These numbers provide clues as to which squares should be filled in and which should be left blank. A correctly solved puzzle will form a pixelated image once all proper squares have been filled in.

The demo of Picross 3D Round 2 largely consists of tutorials that teach puzzle-solving techniques with each of these tutorials followed by a small puzzle that allows the player to try out the recently-learned techniques. This came in handy since the 3D puzzles are much more complex than their 2D counterparts. Each puzzle takes the form of a cluster of small white cubes that can be filled in with one of two different colors. Cubes that are not to be colored in have to be eliminated from the puzzle all-together. Determining what to do with each cube can be challenging as the numerical clues must be considered in the context of three-dimensional space. The game also provides a method to view cross-sectional slices of the puzzle so that the inner cubes of the cluster can be accessed. When the puzzle is complete, the once formless cluster of cubes has been chiseled and colored to form a simplistic blocky 3D model of an animal, household appliance, or Nintendo character. After several tutorial segments, the demo leaves the player alone to solve three new puzzles without any hand-holding. With each of these three, the level of complexity increases.

This demo worked out pretty well for me as the tutorials do a good job teaching the player the type of logical thinking needed to make solving these puzzles in 3D approachable. The music in the game was pretty pleasant and definitely helped put me in the mellow puzzle-solving mood. As this game is almost entirely touch-screen based, I'm kind of surprised Nintendo didn't release this as a mobile game as it would be a great fit for a smartphone or tablet. I'm not sure if I would have the patience for all 300 puzzles included in the full game, but my brain could probably use the exercise so I may end up buying the game if it goes on sale.

I should note that while the tutorials are fairly thorough, I would recommend that those with no Picross experience start with a 2D version in order to learn the basic principles of Picross before graduating to 3D. I'd suggest checking out the free-to-play Pokemon Picross available in the eShop. Players who have already played the original Picross 3D should skip this demo entirely as it doesn't seem like the tutorial segments can be skipped.

Posted by Capsulejay at 8:54 AM