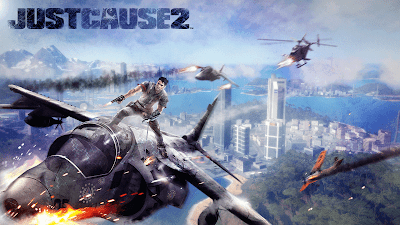 The Square Enix Humble Bundle I purchased last year has really been a gift that keeps on giving. Just Cause 2 was one of the titles in the bundle that had piqued by my interest in the past, but I never got around to trying. I'm about eight hours in, and so far I'm really having a good time with it.

If you've never played Grand Theft Auto (GTA), bear with me, as it's hard to discuss the Just Cause without comparing it to the franchise from which is appears to have drawn a lot of inspiration. Much like GTA, Just Cause 2 is an open-world action game in which the player completes missions that involve stealing cars, flying aircraft, blowing up infrastructure, and assassinating enemy leaders. Where the game separates itself from its inspiration, is that unlike a clunky GTA protagonist, Just Cause's Rico has a wide variety of acrobatic moves such as leaping between moving vehicles, deploying a parachute at any time to suddenly become airborne, and swinging from a grappling hook like Spider-Man.

The GTA games and their various spiritual offspring (Driver, Sleeping Dogs, etc)  are some of my all-time favorite action games, so it makes sense that Just Cause 2 immediately clicked with me. What was surprising, however, was that unlike GTA, the driving and shooting mechanics aren't particularly engaging, but the pure thrill of mastering Rico's other locomotion techniques is the real star of the show. It hasn't taken long for me to get the hang of doing insane stunts such as leaping out of a moving car in order to grappling hook myself to a passing helicopter, throwing the the pilot out of the cockpit, lining up the helicopter to crash into an enemy base, and then parachuting safely out of the helicopter right before the moment of impact. It pretty much feels like being the middle of a Jason Statham movie, and it's awesome.

So far the music, cut scenes, voice acting, and overall plot have all been pretty mediocre, so whether or not this game stays exciting for the entire duration of its 30+ hour play time will entirely rest on how much variety there ends up being to the mission structure. Hopefully, Just Cause 2 will continue to keep things fresh, but there's a chance it could get repetitive before Rico's mission is complete.
Posted by Capsulejay at 8:45 AM