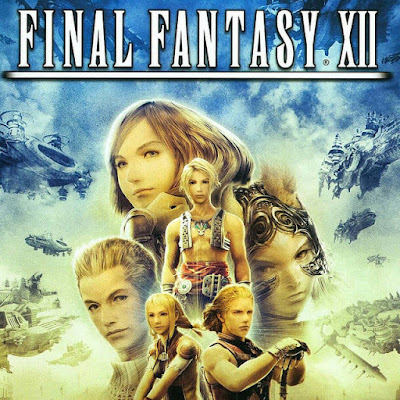 An innovative and satisfying journey, but not without its stumbling blocks

Well, it was nearly a decade in the making, but I've finally played all the way through Final Fantasy XII. Since I've covered many of my main talking points about this game in previous blog posts, I'll keep this review somewhat more to the point: I really enjoyed this game, but a couple of grating flaws and shortcomings kept it from taking a place among my all-time favorite RPGs (or Final Fantasies for that matter).

In general I think Final Fantasy XII succeeds in updating the formula of the series to a more modern style of gameplay. As much as I love the classic games, the traditional Final Fantasy system of random encounters with invisible enemies needed a refresh and thus I found the MMO-style enemy encounters and battles to be a welcome change. I also appreciated that the rigid transitions between dungeons, overworld, towns, and battle screens of previous Final Fantasies, were scrapped in favor of a continuous presentation that does much to streamline the experience and create a more cohesive world.

These much-appreciated updates to the Final Fantasy format are unfortunately coupled with my two biggest gripes with this game: repetitive level design and a severe lack of difficulty balancing. Several of the areas to explore in Ivalice felt barren and/or repetitive in their designs. Areas such as the Yensa Sandsea, Giruvegan, and Pharos Tower are all guilty of recycling the same few landscape features over and over in a pattern that repeated entirely too many times, making each of these areas feel like a real slog to play through. This problem is further compounded by this game's lack of difficulty balance. I generally found myself having a good time traveling along the primary story path, taking on enemies and upgrading characters at what I believed to be a respectable clip, only to hit very abrupt spikes in difficulty. I imagine the game's designers intended for these spikes to serve as incentives for the player to depart from the critical path and spend time on side quests and hunts. However, I found that the rewards and XP for completing these challenges were rarely significant enough to make investing time in them worthwhile. Since grinding appeared to be the most effective means to advance, I ultimately took the cheap way out and set up my party's gambits such that my characters would grind all by themselves and left them to auto-level overnight. While this method was successful in allowing me to continue my play-through without any further frustration, the fact that I felt the need to exploit the game's systems in this way really speaks to the severity of this difficulty curve problem.

Setting these mechanics issues aside, from a creative standpoint this game is a much more well-balanced package. Playing Final Fantasy XII gives the player a distinct impression that the world of Ivalice existed far before the game takes place and will persist long after the credits roll. The game's story of warring nations is far more grand than the exploits of the playable characters themselves, which I found further enhanced the sense of the place. While the plot is fairly one-note in terms of its tone, I have to give it credit for touching on some ambitious subject matter including coping with loss, redemption, religion, and nuclear nonproliferation. It would have been nice if the coverage of all these weighty topics had been broken up with some moments of levity, but for the most part the story stayed bleak and serious the whole way through. The six members of the party each have pretty distinct personalities and have a few amusing interactions with each other over the course of the adventure. However, while each character was generally likable and unique, they were also all incredibly one-dimensional. I would have appreciated some character moments in which we would see Balthier momentarily lose his cool and show some real concern, or perhaps have Ashe briefly take a break from being crushed by the weight of her responsibilities to crack a smile, but unfortunately that kind of character development isn't something that takes place. I should also note that the musical score was very pleasant and always fitting to the game scenario, but it didn't stick with me the way some of the previous Final Fantasy soundtracks have. I will say that the game's one vocal piece, "Kiss Me Goodbye" is one of the better songs with English lyrics that I've heard in the Final Fantasy series.

It's hard to neatly wrap-up my feelings on Final Fantasy XII, as I absolutely loved the game for the first 60-75% of its playtime, only for some jarring flaws to come to the surface in the third act. I found the game's conclusion pretty satisfying and ultimately walked away feeling positive, but with the distinct impression that there were some tweaks that would need to be made for this to be a 5-star experience. I hope that the upcoming Zodiac Age remaster of Final Fantasy XII corrects enough of its issues to transform it into the fantastic RPG that it has the potential to be.

Score: ⭐️⭐️⭐️⭐️
Completion Time: 89 hours, 57 minutes (Main story and a handful of side quests. Playtime somewhat inflated due to running an auto-leveling routine.)
Posted by Capsulejay at 12:59 AM