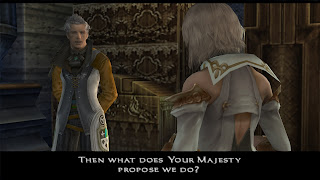 I'm currently about 40 hours in and approximately 60-70% through Final Fantasy XII and have come to realize that there's a lot to unpack here. So rather than save it all for an epically long review once I complete the game, I thought I'd give some updated thoughts and impressions from what I've experienced so far:
Overall, I've been having a lot of fun with Final Fantasy XII and am looking forward to playing through the final third of the adventure. As tempted as I am to dig deep, I'll probably continue to stick primarily to the critical path and limit my side quests since there are still many more big RPGs and open-world games I'm planning to tackle before the end of the year. Stay tuned for my wrap-up and review of Final Fantasy XII within the next few weeks!
Posted by Capsulejay at 10:47 PM