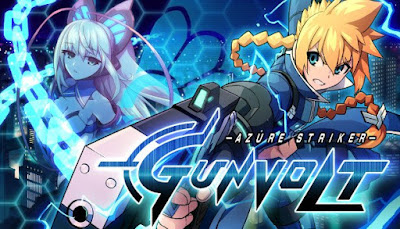 Long time readers know that I am a regular participant in Chic-Pixel's Community Game-Along events. With April's theme being Capcom games, I had a lot of options. For my first #CapcoMonth game, I selected Azure Striker Gunvolt. This game wasn't developed by Capcom itself, but by ex-Capcom employees at Inti Creates. Gunvolt is heavily inspired by Mega Man, which isn't among my favorite retro series, so I had previously looked the other way when Inti Creates decided to take their own spin on this style of game. However, after getting some hands-on time with one of the Gunvolt games on the show floor at MomoCon last year (impressions), I could immediately tell this was more than a simple Mega Man clone and the first game ended up on my Steam wishlist as soon as I got home.

Overview
Azure Striker Gunvolt is a 2D action game in the style of Mega Man. The game is comprised of action-platforming stages that culminate in a boss battle; the order that these stages are played is up to the player. However, unlike Mega Man, Gunvolt does not defeat his enemies purely by firing projectiles at them. Instead, he tags enemies with a needle gun that does minimal damage but increase's the target's electrical conductivity. He then emits an electric field that strikes down each tagged enemy with lightning. (You've probably figured out by now, why the main character is named "Gunvolt".) Azure Striker Gunvolt takes place in a dystopian cyberpunk setting with heavy anime influences. This review is based on the PC version of the game, which is available via Steam.

Cons
After loving the last Inti Creates game I played, Bloodstained (review), I was pleased to find that this studio had knocked in out of the park with another excellent 2D action platformer. I'm already looking forward to playing the next two games in this series! I highly recommend Azure Striker Gunvolt to anyone who enjoys retro-style action, even those who aren't fans of Mega Man, Gunvolt's source of inspiration. 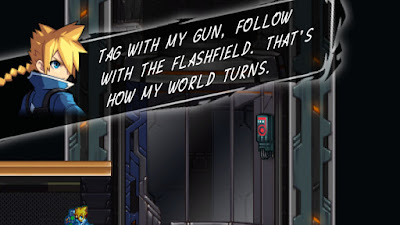 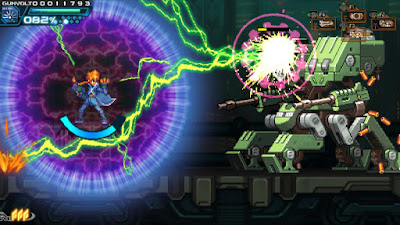 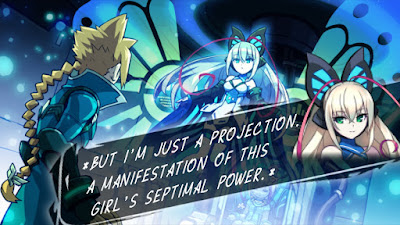 Note: This post is part of the Chic-Pixel community's #CapcoMonth event. For more info and their full list of events, check out this page: Community Game-Along Master List 2020
Posted by Capsulejay at 5:38 PM