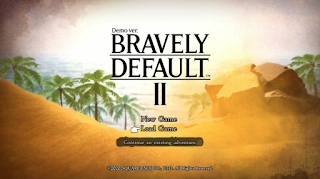 As someone who is a massive fan of Final Fantasy 5, its successor series, Bravely Default, has been recommended to me countless times. However, every time a game in this series is brought up, there's always some kind of caveat like "This game is great, but that second act is a doozy!" or "That game improves on some aspects of the original, but downgrades in other areas." As a result, I've been waiting for an ideal jumping-on point for this franchise for a while. When I saw in the recent Nintendo Direct that a demo for the newest game in the series, Bravely Default 2, was available, I figured that the time had finally come to get on board.

Background
Bravely Default 2 is a turn-based RPG in the style of classic Final Fantasy and Dragon Quest games. One of the game's defining features is a job system that lets each character mix and match skills from a variety of classes. The demo features four classes: White Mage, Black Mage, Vanguard (knight), and Monk. The other major feature is the "Brave" and "Default" system that allows you to take extra actions in one turn at the expense of subsequent turns; which creates a risk-reward dynamic to the battle strategy. Despite its somewhat misleading name, Bravely Default 2 is actually the third game in the series and begins a new story with different characters than the previous games.

Ultimately, this demo had the opposite effect than what was intended; it made me feel less inclined to pick up the full version. Why would I pre-order the full game when the demo was so discouraging to play? Since there seemed to be potential in the game from an artistic and mechanical standpoint, I'll probably give it a second look if reviews indicate that the final game has been drastically rebalanced to offer a less grinding-focused experience.