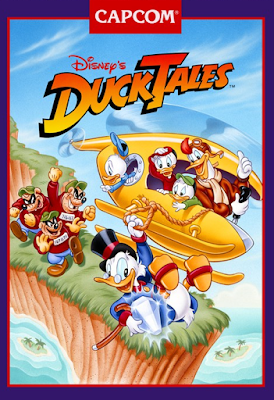 While I generally consider myself to know my classic games pretty well, I have to admit that I tend to dismiss licensed games offhand. Thus, Duck Tales wasn't on my radar until rather recently. In fact, I wasn't aware of this game's classic status until I started noticing how frequently its music was featured on video game music podcasts and name-that-tune events.

Overview
Duck Tales is a 2D platformer based on the animated series of the same name. In the game, Scrooge McDuck must explore six sprawling levels to recover his stolen valuables. Scrooge's unique ability is to use his cane as a pogo stick to traverse the environment. He can also use his cane like a golf club to whack small objects across the screen. This game was originally released for the NES. I streamed the PC version via the Disney Afternoon Collection on my Twitch channel.

Playing through the original version of Duck Tales was a pretty cool experience; I can definitely see why it's considered a classic. Given that the few minor issues I had were mostly the product of NES-era game design, I'm very curious to try Wayforward's remastered version of Duck Tales to see what kind of tweaks they may have made. Either way, I definitely recommend trying out Duck Tales via the Disney Afternoon Collection to anyone interested in 8-bit classics or Disney cartoons.

Note: This post is part of the Chic-Pixel community's #CapcoMonth event. For more info and their full list of events, check out this page: Community Game-Along Master List 2020
Posted by Capsulejay at 12:26 AM