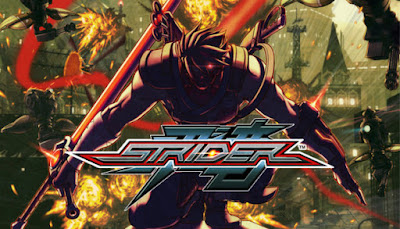 Strider is one of Capcom's series that I've often admired from afar; I've watched Twitch streams of the 8-bit and 16-bit games, and I've looked longingly at the box art of the PS1 game as a broke kid in Walmart, but I've never really dug into any of the games myself. So to close out my celebration of #CapcoMonth, I decided to finally jump in with the most recent entry in the series, Strider (2014), which I was able to pick up as part of a Humble Bundle.

Overview
Strider (2014) is a 2D "Metroidvania"-style platform game that serves as a revival of Capcoms's classic ninja action series. In the game, an elite ninja operative, Strider Hiryu, must infiltrate a heavily fortified cyberpunk dystopian city to assassinate an evil dictator. As he explores the city to gain access to the dictator's stronghold, he acquires a variety of new abilities and faces off against the dictator's generals. This review is based on the PC version of the game.


While Strider (2014) lacks some of the bells and whistles that many newer Metroidvania games might have, this game nails the most important facet of the genre: character locomotion. Ninja-ing my way through the dystopian future landscape and cleaving through waves of enemies always felt satisfying. For that alone, I can comfortably recommend Strider (2014) to any Metroidvania fans. This experience also has me interested to go back and try the older Striders that I missed; maybe I'll finally pick up that PS1 game that my younger poorer self missed out on.

Note: This post is part of the Chic-Pixel community's #CapcoMonth event. For more info and their full list of events, check out this page: Community Game-Along Master List 2020
Posted by Capsulejay at 6:32 PM