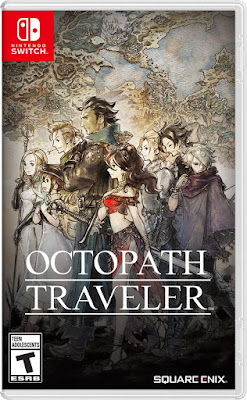 After being enthralled by the Octopath Traveler demo last year, it was pretty clear that this classic-style JRPG would be right up my alley. The wait until the release of the full game felt long, but it has finally arrived. At this point, I'm about 10 hours into the campaign and have added five of the eight characters to my party. Here are some early thoughts on my time with the game:
I was initially concerned about some of the early reviews I was seeing for this game, but I'm having a blast with Octopath Traveler so far. I'm thinking that the eagerness of some outlets to brand this game as "the next Final Fantasy 6" did it a disservice. Octopath is looking less like one grand quest with an ensemble cast like Final Fantasy 6, and more like a set of smaller stories that occasionally intertwine, a la SaGa Frontier. Thankfully for me, that's exactly what I wanted.

PS:
This month marks the two-year anniversary of Tales from the Backlog! The event that got me started with blogging is called Blaugust and it returns this year as #BlaugustReborn! If you would like to learn more about Blaugust or sign up to participate, check out this post from fellow game blogger, Belghast: Tales of the Aggronaut - First of Blaugust
Posted by Capsulejay at 9:36 PM