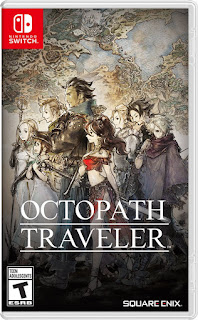 After writing my impressions last week, I’ve sunk a bunch of additional hours into Octopath Traveler. At this point, I’ve now played through the first chapter for all eight characters, and have started the second chapter for the merchant, Tressa. Some additional thoughts now that I have a bigger picture of what this game has to offer:  Octopath Traveler continues to be a joy to play and it will probably keep me busy for at least the rest of this month. Since I'm increasing my posting frequency for #BlaugustReborn, I'll likely post one more impressions post before writing my review. Since this post was mainly about characters and story, the next will probably focus on combat strategy once I've gotten a taste of higher level play. In any event, I still highly recommend that any RPG fan give this game a look.