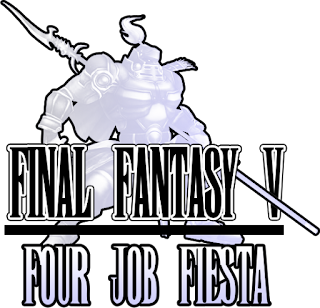 I am very excited to be participating in the Four Job Fiesta this year. It's a charity event benefiting Child's Play in which participants play through Final Fantasy 5 with a specialized set of challenge rules. Since FF5 is one of my all-time favorite RPGs, I couldn't be more thrilled to revisit it while also supporting a great cause!

The Gameplay:
Normally in Final Fantasy 5, each time the party reaches one of the four elemental crystals (Wind, Water, Fire, and Earth), a new set of character classes is unlocked. Effectively mixing, matching, and swapping classes is a major part of the strategy, and that's where the rules of the Four Job Fiesta throw in a monkey wrench. When playing for the Fiesta, players are restricted to using only one randomly selected class per crystal. Being limited to using only 4 of the 21 possible classes throughout the entire game radically changes the way players approach battles and increases the difficulty. Fiesta participants have from June 19th through August 31st to complete their runs through the FF5.

The Charity:
The Four Job Fiesta benefits the Child's Play Charity. This organization seeks to improve the quality of life of children in hospitals and domestic abuse shelters by providing them with games and toys. The Fiesta raises funds for the charity in three ways:
My Participation:
I will be starting my run on June 19th and periodically streaming my play-through on Twitch. I will also be posting status updates and screenshots on Twitter and this blog throughout my run, especially after major in-game milestones.

My Auction:
As I announced last night on my Twitch channel, I am auctioning off the naming rights to my player character (whose default name is Bartz). If you would like to place a bid to be the one to name my character, please send me a tweet. I will close the auction and contact the highest bidder at 11 PM EDT on June 18th. Opening bids start at $5 US. Upon confirmation that the donation to Child's Play has been made, Bartz's new name shall be whatever the highest bidder desires!
After the end of the auction, anyone who donates or pledges to sponsor my run will be added to the Special Thanks section of my Four Job Fiesta blog posts. Of course, donors are welcome to remain anonymous if they'd prefer.

Note: I won't be able to accept blatantly profane names since the character name will be appearing in screenshots and on my Twitch stream, but other than that, I invite whatever humorous, unique, or creative names the auction winner can think of.

For more information, to sign up to participate, or to make a charitable donation, please visit fourjobfiesta.com. If you have any questions you'd like to ask me directly, please contact me via my  Twitter page.
Posted by Capsulejay at 12:11 AM