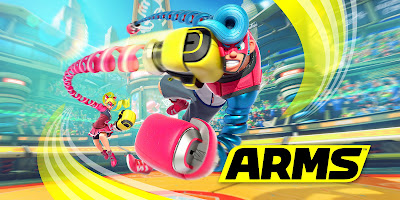 A game that I like more in theory than I do in practice
Over the past 2 weekends, I've had the opportunity to try out the online multiplayer demo of Nintendo's newest fighting game, ARMS. Now that I've been able to participate in 3 different sessions of the ARMS Global Test Punch, my thoughts on the game are starting to come together.
Overall, I really appreciate the creativity and intricacies of ARMS, but I'm just not sure that it's a game for me. Generally, the games that work for me have to do at least one of the three following things: offer a satisfying single-player campaign, be a good co-op experience with my wife, or keep house guests entertained. From what I've heard from those who have early access to the full game, the single-player is very limited and there's been no mention of co-op. Thus, the whole thing hinges on ARMS's potential as a party game, and at this point, I don't think this game's mechanics lend themselves well to that. From what I can see in the demo, ARMS is a game that really encourages honing one's skills and then going online in search of worthy opponents. By the time I got to the 45-minute mark in my third Test Punch session, I found myself checking my watch; I think I got my fill of online competition from the demo alone. Thus, there's a good chance I'll be passing on the full version of ARMS until it gets a price-drop unless I hear something especially compelling about the content not featured in the demo. 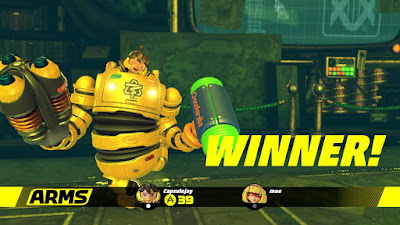 Posted by Capsulejay at 5:00 AM