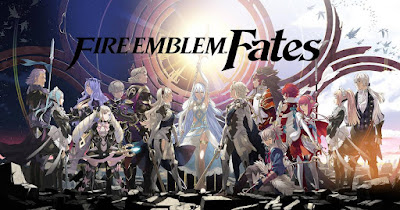 Countless hours of battles and betrayals

After chipping away at it for about nine months, I've finally finished all three paths of Fire Emblem Fates. Trying to collect my thoughts on this epic strategy RPG has been a challenge since I've spent the better part of a year with it, so after a while it became more like a part of my life rather than just  an entertainment product I consumed. It almost feels like trying to critically evaluate nine months worth of drinking coffee or driving a car. In the case of Fates, I'll start off with some thoughts on the overall experience and then provide some commentary on the individual paths.

As soon as I started Fire Emblem Fates, I was immediately impressed with it from a presentation standpoint. Everything from the opening cut scene, to the music, to the character portraits is polished, stylish, and does a good job establishing the tone of the grand journey the player is about to begin. The opening missions also explain the game's mechanics including a few significant changes from Fates' predecessor, Awakening, that I found to be welcome improvements. The weapon triangle has now become conveniently color-coded and has been expanded to cover projectile weapons and magic. This makes figuring out the right weapon for a given confrontation much more straight-forward. I also appreciated the removal of weapon durability: one less thing to micro-manage. After the tutorial missions end, the player must choose between the three paths. Here's a mini-review of each individually, presented in the order that I played them:

Birthright
This was the path I played first as it was said to be the best starting point in terms of difficulty and story. It starts out with a few fairly interesting missions, but unfortunately quickly runs out of momentum. It was in this path that I came to realize that "Rout the enemy" is a Fire Emblem euphemism for "Kill everybody", since that's pretty much the objective of every single mission for the bulk of the Birthright campaign. As a result, many of the mid-campaign missions are just mazes peppered with enemies that often feel like filler content. The last few chapters, however, do pick up a bit. The narrative of Birthright successfully lays down the framework necessary to provide context to the other two paths, but is not especially compelling by itself since it's a fairly simple tale of good vs evil. Among the three paths, Birthright was definitely the weakest.
Path Score: ⭐️⭐️⭐️
Path Completion Time: 60 hours, 30  minutes (main story and most paralogues)

Conquest
In terms of both gameplay and story, Conquest was best of the three paths. The mission structure and map design are much more varied than in Birthright, and many of the levels have dynamic features that the player must adapt to during battle. In cases in which the basic map layouts were recycled from Birthright, enough of a new twist was placed on each to keep it feeling fresh. I also found the morally murky "ends justify the means" nature of Conquest's story to be much more interesting than the plots of the other two campaigns.
Path Score: ⭐️⭐️⭐️⭐️⭐️
Path Completion Time: 50 hours, 44 minutes (main story and some paralogues)


Revelations
Revelations is essentially a middle ground between the other two paths. The missions still feature a decent amount of variety, but after playing the other two paths, a certain sense of repetitiveness does start to set in since at this point the player has now seen many of the maps three times. The fact that this campaign allows the player to mix and match units and weapons from Birthright and Conquest does allow for some team structure experimentation that does help to keep things interesting, however. The main function of the Revelations narrative is to provide answers to many of the unsolved mysteries from the previous two paths, and it does this pretty well, but it doesn't do much to stray from the conventions of typical fantasy JRPG/anime stories. Finishing off Revelations' final boss and putting a neat little bow on the story of this massive game is still very satisfying, though.
Path Score: ⭐️⭐️⭐️⭐️
Path Completion Time: 51 hours, 30 minutes (main story and some paralogues)


Overall, having Fire Emblem Fates on my 3DS as my companion throughout the year 2016 was a very positive experience. After playing through all three campaigns, I can definitely say that I'll be satiated on Fire Emblem for some time to come. While the quality of the game as a whole was quite high, at various points I did feel like the game's designers were stretching the content they had created a little thin in order to make three full-length campaigns. For my purposes, trimming some of the filler and creating two really tight campaigns instead would have elevated Fates to be a truly incredible Fire Emblem experience. That being said, I'd still highly recommend Fates to beginners and seasoned Fire Emblem players alike. For those shorter on money or time, I'd suggest picking up Conquest and Revelations while just reading a plot synopsis of Birthright to fill in the gaps.
Overall Score: ⭐️⭐️⭐️⭐️
Total Completion Time: 162 hours, 44 minutes

Posted by Capsulejay at 2:11 AM