After Murdered Soul Suspect, my wife and I decided to dig further into the horror-adventure genre with two Japanese indie titles: Ib and The Witch's House. Both of these games were created in RPG Maker and are available for free. Since these games are short (~2 hours) and I'm a little pressed for time, these are going to be mini-reviews. 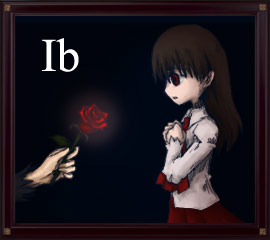 Ib
Ib is about a little girl who finds herself trapped inside a surreal haunted art gallery. To escape she must solve various puzzles to progress through the gallery while avoiding monsters born from the works of art. I was initially skeptical that an RPG Maker game could pull off a creepy atmosphere or sense of dread, but Ib manages to pull it off despite its primitive pixelated graphics. There's no combat in the game, so enemy encounters are a matter of evasion and hiding behind obstacles. These  encounters are pretty straight-forward, so that the game can focus on its strengths: atmosphere and puzzles. While there are a few moments where the game's graphical limitations can cause issues with interpreting a puzzle or finding an item, the overall package is a fun and well-crafted minimalist horror-adventure game.
Score: ⭐️⭐️⭐️⭐️
Completion Time: 3 hours

The Witch's House
After enjoying Ib so much, we were pretty psyched to jump into another one of these adventures the following night.
The Witch's House is about a girl who wanders into a witch's house in the middle of the woods and has to escape from the traps and monsters inside. This game immediately stands out from Ib since it was made with a more modern version of RPG Maker, so the graphics are much cleaner and easy to interpret. From a gameplay standpoint, The Witch's House initially plays very similar to Ib, but adds a few elements that may please some hardcore horror game fans, but really turned me off: jump scares and frequent sudden deaths. Enemies often appear suddenly upon entering a new area, have very high movement speed, and cause 1-hit kills if they catch you. It also doesn't help matters that RPG Maker's controls are just not well suited to the quick maneuvers this game requires to escape enemies. As a result, deaths are extremely frequent and memorizing enemy spawn locations is a must. For me, these irritating moments quickly got in the way of my enjoyment of the puzzle-solving and exploration that I wanted from The Witch's House.
Score: ⭐️⭐️
Completion Time: 1 hour, 30 minutes

Acknowledgement: I initially learned about these games from the Chic Pixel blog, so be sure to check that out if you're interesting in Japanese nerd culture.

Posted by Capsulejay at 2:40 AM