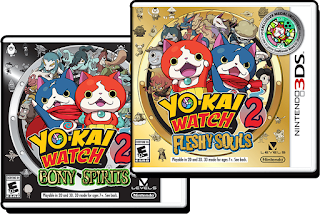 With the new Pokemon games due to come out soon, I decided to check out the one game that was said to give the Pokemon series a run for its money (in Japan at least): Yokai Watch.

I'll just come out and say it: This may be one of the worst demos I've ever played. While it starts out perfectly fine with a wacky cartoon theme song and some silly opening dialog that I can see appealing to children, there is nothing else here to convince someone to get the full game. After going through some brief dialog, the player is directed to walk a very short distance before immediately getting pulling into a cut scene. The cut scene then drops the player into a battle with only the most minimal explanation of the combat mechanics. I found myself just clicking around through menus aimlessly until the enemy was defeated, but I'm not even sure to what extent (if any) my input had on the outcome of the battle. With the battle completed, there's a few more lines of dialog that presumably are there to set up the core mystery of the plot, and then the demo abruptly ends. So that's it: some dialog and a single poorly-explained battle. The only thing I positive I can really say is that the demo was a nice showcase of the game's graphics, which are pretty impressive by 3DS standards. Other than that, this demo utterly failed to show me anything that would put Yokai Watch in the same league as Pokemon.

Bottom line: Don't waste your time or your memory card space on this incredibly underwhelming demo.
Posted by Capsulejay at 8:45 AM