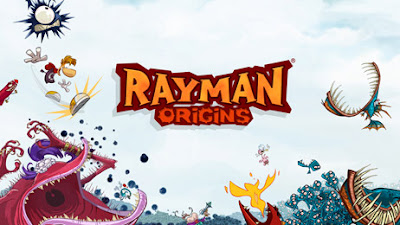 A challenging platformer that compensates for frustration with charm

Having played so many open-world exploratory games lately, it felt really good to sink my teeth into a traditional linear 2D platformer. Hub worlds are nice every now and then if they really add something to a game, but otherwise I definitely appreciate a simple map screen or level select screen that cuts out the fluff and allows me to get straight into the action.

Rayman Origins was generally a really satisfying play-through, but was punctuated by some of the most frustrating moments I've experienced in a game in quite some time. Thus, I'll start with the negatives:
Right off the bat, I didn't like the way Rayman handles. Having grown up with the pixel-perfect precision of classic platformers like Mario and Sonic, Rayman feels floaty and clumsy to control. Everything from his momentum, to his bounce, to his attacks just felt wrong to me and took a while to get used to. Many of my deaths in the early part of the game were the result of Rayman slipping off a platform or not landing where I would expect him to after a jump. Mercifully, the game provides infinite lives and frequent check-points in order to keep any one death from being a major setback. This mercy is especially important in the later part of the game, in which the level design becomes especially brutal. The last few regular stages and most of the challenge stages are so unforgiving that they essentially come down to trial and error coupled with rote memorization. It was in these stages that I often came close to putting down the controller and walking away from the game, but I somehow always managed to pull victory from the jaws of defeat and progress forward in the end.

The negative factors of Rayman Origins are compensated for due to the abundance of two positive traits: charm and creativity.
The UbiArt Framework used in making this game's graphics really brings the colorful cartoon characters of Michel Ancel to life. The stages these characters inhabit are also works of art, both in terms of visual appeal and level design. An example of one of my favorite levels is a Mexican food inspired stage in which enemies attack by squirting napalm-like hot sauce at Rayman. I also appreciated that levels feature variety in terms of play style: traditional platformer levels, forced scrolling racing stages, and shoot-em-up aerial battles. Bringing all these elements together is a fantastic musical score that has the full range from whimsical to epic. Some of my favorite pieces sound as if they're being sung by the game world's inhabitants encouraging Rayman to press on.

Ultimately, the moments of joy I experienced playing Rayman Origins were enough to motivate me to persevere through the tough spots and come away with positive feelings about the game. Players that have a lot of patience and are looking for a platforming challenge will find a lot to like. However, platforming novices or those who get discouraged easily may find themselves over their heads with this one.

Score: ⭐️⭐️⭐️⭐️
Completion Time: Approx. 18* hours (Main story plus all unlockable stages)
*Uplay doesn't have a play clock, so this is a very rough estimate
Posted by Capsulejay at 8:45 AM