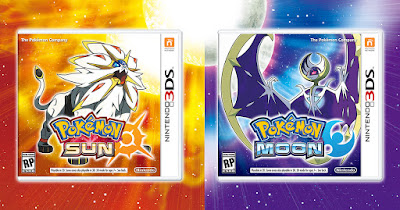 I haven't played a Pokemon game since Pokemon Ruby (i.e. about 13 years ago), and thought that now would be a fine time to check in with the series and see if enough has changed to pull me back in. This is another case where I'm really glad that Nintendo has started posting demos in the eShop.

Similar to the Yokai Watch 2 demo, I was immediately struck by the beautiful graphical presentation; Fire Emblem Fates, Yokai Watch, and now Pokemon Sun/Moon are real showcases of how far the visuals and audio of portable games have progressed. I'm guessing that the lack of stereoscopic 3D in this game is a result of the graphics pushing the 3DS hardware to its limits. I especially admired the use of varied camera perspectives in towns and battles that helped bring the world of Pokemon to life. The music featured in the demo sounded great and complimented the graphics and gameplay quite nicely.

Unlike the Yokai Watch 2 demo, the Pokemon Sun/Moon demo is structured in a way that guides the player through a good vertical slice of the gameplay. Over the course of an hour or two, the player can wander around through town, battle Pokemon in the field, meet some seemingly plot-essential characters, and face off against a boss trainer. While I enjoyed getting to sample these different aspects of the game and see how they've changed, I wasn't really able to get a feel for the difficulty or strategy of Pokemon Sun/Moon since the starting Pokemon in the demo is so overpowered that I was able to one-shot pretty much every enemy I encountered. Thankfully at the end of the main quest of the demo, the player is free to explore further and there are some additional trainers to battle that do manage to put up a decent fight, so there may be some potential for a challenge in the full game, though I suspect the plot-critical quests will be deliberately easy for the sake of younger players.

Overall, this demo impressed me quite a bit and piqued my interest to play the full game at some point. My favorite upgrade to the classic Pokemon formula is the ability to summon a Tauros to use as a mount as well as break through large rocks. This helper Pokemon mechanic eliminates the need for items like the bicycle and HMs like Rock Smash and Cut; this is the exact kind of streamlining Pokemon has been needing and it makes me optimistic that there will be other quality of life improvements throughout the full game. One concern I had was that I noticed that the demo seemed to rapidly deplete my 3DS's battery (after playing for 2 hours I went from fully charged to 25%). Other than this one issue and some concerns about the difficulty level, I think that I found enough to like here to consider returning to Pokemon, but I will probably wait for the rumored Nintendo Switch version, Pokemon Stars, so that I can enjoy the improved graphics and sound of this Pokemon generation on a larger screen when I'm playing at home.
Posted by Capsulejay at 8:45 AM