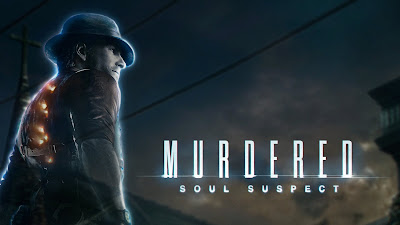 An inept adventure game with a few clever ideas

Murdered Soul Suspect is yet another game in the backlog from last year's Square Enix Humble Bundle. With Halloween almost upon us, my wife and I were looking for a spooky game to play through together, and since this is an adventure game about ghosts and it was already in my queue, we thought it might fit the bill.

In Murdered Soul Suspect, Detective Ronan dies while pursuing a serial killer and is left roaming the earth as a ghost who must complete his unfinished business, solving the serial killer case, so that his soul can pass on to heaven and he can be reunited with his recently deceased wife. While Ronan was apparently not a particularly good detective in life (more on that later), as a ghost he has the benefit of powers that allow him walk through walls, have psychic visions, teleport, and possess living humans (and sometimes cats). The bulk of the gameplay involves using ghost powers to traverse the environments until arriving upon investigation areas in which clues must be gathered and pieced together in order to progress the plot and get closer to solving the mystery. In addition to these adventure game elements, there are occasional stealth action sections where Ronan must evade ghost-eating demons that patrol certain areas of the map.

As promising as this premise and mixture of gameplay styles initially seemed, much of it is handled rather clumsily. Unlike a traditional point-and-click adventure game, there are no inventory items to use or mechanical contraptions to operate since ghosts pass straight through solid objects. Thus most of the puzzle-solving takes the form of an Easter egg hunt in which Ronan must search each investigation area for the indicated number of clues. Once all the clues have been found, a question appears on screen such as "How did this man die?" that must be answered by selecting the most relevant clues. This is where it becomes painfully obvious that Ronan is a terrible detective; the crime scene might contain a tree, rope, and a body with lacerations around the neck, but the player must still go through the song and dance of gathering and selecting the proper clues to spell out to the inept investigator that the victim's cause of death was not drowning or poison. Further detracting from these investigations is that clues are sometimes hard to identify among the scenery and on several occasions awkward wording of the questions can make it difficult to determine which clues the game deems most relevant, even though the player has probably already solved the mystery of the scene. However, there's no real penalty for answering a question incorrectly, so the player can just press on with trial and error until (s)he can eventually proceed. On the other hand, using the ghost powers to get around the map between these investigations feels pretty good and is generally the most most interesting part of the gameplay. The demon encounters do a good job of adding some fear/excitement, though I found that pulling off the QTE maneuvers to kill a demon was a somewhat frustrating task.

Murdered Soul Suspect's plot is a hodgepodge of film noir and ghost story cliches all rolled together, but is presented in a fashion that is enjoyable to watch, yet still pretty corny. The voice acting is also pretty decent and the story does manage to sneak in a twist here and there, even if the player is often going to be several steps ahead of Ronan in terms of solving the case. Where the game succeeds the most is establishing a spooky, though not necessarily scary, atmosphere. Each of the game's environments from grisly murder scenes to cemeteries to psychiatric hospitals are exactly as creepy and dreary as one would want in a game for Halloween.

Murdered Soul Suspect is a game for which my entire reviewing process falls apart. My wife and I liked playing this game, but also couldn't help but acknowledge that it wasn't a particularly good adventure game from an objective standpoint. Thus, my verdict comes with some serious caveats: If you're in a similar situation to mine, in which you're looking for a spooky adventure to complete with a partner and are a fairly forgiving player, you'll probably have an enjoyable experience with this game. However, for the discerning solo adventure game player looking for clever puzzles or a thought-provoking plot, definitely look elsewhere.

Score: ⭐️⭐️⭐️*
Completion Time: 12 hours, 24 minutes (Main story plus 92% of Steam achievements)
*In a different set of circumstances, I could easily see myself giving this game 2 stars instead

Note: This review is the product of discussions my wife and I had after finishing the game, so I want to acknowledge the contribution of her insight. Also, she wanted me to emphasis that by far the highlight of the game is getting the ability to possess and controls cats. I totally agree.