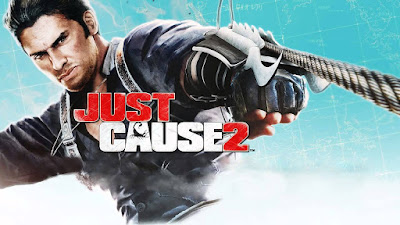 In my impressions post for Just Cause 2, I talked extensively about how the thrill of causing mayhem with Rico's impressive arsenal of moves appeared to be the main draw of the game while pretty much everything else took a back seat. After finishing the game I can  say that my initial impressions were spot-on, and that's totally fine; Just Cause 2 delivered a steady steam of fun even though my brain was able to nap much of the time.

The game's structure was interesting in that it deviated from its GTA inspiration by only having 7 story-essential missions. To unlock each of these story missions, Rico must earn the required amount of "Chaos" (essentially XP) by completing a handful of smaller faction missions and destroying enemy property. There's a total of 49 faction missions, but a significantly smaller number of them need to be completed to make it to the end of the game. As a result, these faction missions represent a large amount of the playtime of Just Cause 2, but vary wildly in scope from somewhat bland sub-3-minute errands (Kill X, Destroy Y), to rather involved set-piece focused adventures that rival the content of the story missions. Unfortunately, it's not clear how to tell which end of this spectrum a mission drawn from this grab-bag will be until your start it. In my case, I was having a good time and ended up completing all 49 faction missions anyway, so the unevenness of these missions didn't affect me too much, but I could see a player wanting to play the best-of-the-best on a shorter play-through getting frustrated. Ideally the faction missions should have had sub classifications so that the player could have the option of skipping some of the smaller filler ones and focusing on the more impressive ones.

From a technical standpoint, JC2 ran glitch-free, controlled tightly, and had some nice-looking vistas by 2010 standards. Most importantly, the explosion animations looked great and made destroying enemy structures and vehicles very satisfying. I did run into some issues with the game's AI that sometimes worked in my favor (a boss getting stuck in a vulnerable position) and other times did not (an ally being incapable of jumping over a 1-foot guardrail). These issues were annoying when they cropped up, but they were thankfully infrequent enough to not significantly tarnish the experience.

While the plot of Just Cause 2 was fairly minimal, I'm not quite sure what to make of presentation of the game's simple story. After seeing the Hollywood-quality cinematics of GTA 4 and Sleeping Dogs, Just Cause 2's cut scenes were very corny and unimpressively acted. I often found myself watching a scene and wondering if what I was seeing was meant to be humorous political satire or just pure camp. The fact that most of the characters were portrayed as wacky cultural stereotypes didn't help matters much on this front either, though to be fair, the game was definitely an equal-opportunity offender.

Despite a few flaws and some repetitive missions, I was still having fun throughout my 25 hours with the game and that's definitely saying something. While clearly not on the same plane as a masterpiece like GTA 4, Just Cause 2 is a classic example of how sound mechanics and a satisfying gameplay loop can trump other short-comings. If you love open-world action games or over-the-top summer blockbuster movies, Just Cause 2 is probably right up your alley.