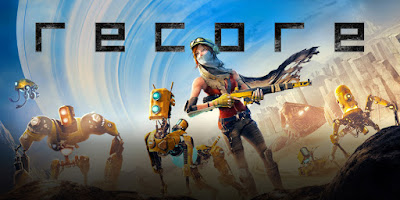 At last year's E3, ReCore was one of the few Xbox One exclusive games that really piqued my interest, so I was pretty excited when I found out that it was coming to PC as part of Microsoft's Xbox Play Anywhere initiative. After hearing some very mixed reviews for the game when it came out a few weeks ago, I was glad to hear there was a demo available so I could try it out for myself.

I should start out by saying that the demo was set up such that it starts out at the very beginning of the full game with a 30-minute countdown timer for the free trial period. As a result, I was only able to get a very small taste of the game and chose to experience as much gameplay as possible rather than devoting any time to adjusting settings or performance optimization. I found that outside of a long loading time on the title screen, the game ran very smoothly on "High" settings. However, for some reason the resolution was locked at 720p, giving everything a somewhat blurry look on my 1080p screen. I'm assuming this is something I could fix given more time if I buy the full game.

After an extremely brief opening cut scene, I was dropped right into gameplay and was immediately impressed with how solidly the game controlled. The Metroid/Nintendo lineage was apparent right off the bat; making Joule run, jump, and shoot all felt really natural with the Xbox 360 controller. There were a few minutes of light platforming before entering a cave that served as a sort of mini-dungeon and combat tutorial area. Combat consists of Zelda-style lock-on aiming with the option to use a grappling hook to rip the cores out of enemies as a finisher. Capturing these cores rather than simply destroying an enemy gives an XP boost as well as provides crafting supplies, but I didn't really get to see the implications of this in the demo. Joule is aided in combat and exploration by her robot dog companion that can attack enemies and help find hidden items. Later on it appears that she can recruit other robot animal helpers and craft various upgrades for them. This cave area didn't have much in the way of puzzles to solve, and was mostly focused on combat, platforming, and finding keys to unlock doors. Predictably, the mini-dungeon ended with the requisite giant spider boss that every video game seems to need to have. The boss wasn't very difficult but it effectively served the purpose of allowing me to master the basic battle mechanics. With the boss defeated, my demo fittingly ended soon afterward.

In addition to the more obvious Metroid and Zelda influences, this brief gameplay experience of navigating a dungeon with an AI companion gave me some Beyond Good and Evil vibes, which is definitely a plus. The environments I got to see were pretty standard desert and cave settings, so most of the ReCore's personality comes from the enemies, robot helpers, and to a lesser extent the protagonist, Joule. As Joule is the only speaking character, I couldn't help but notice that even in the span of a 30-minute demo, she spends a lot of time thinking out loud and narrating her own actions. I'm hoping this is mostly done for tutorial purposes at the beginning of the game and is not a constant throughout since I only need to hear things like "I wonder where the power source is?" and "There sure are a lot of enemies here" so many times, but maybe I would get used it.

Ultimately, thirty minutes with ReCore was just not enough time to gauge how much I would enjoy the whole game, but the little bit I got to play did seem to have potential. At this point I'm not sold enough to spend the $40 on the full game, but will definitely be keeping an eye out for a sale and may revisit the game once I've finished off my backlog.
Posted by Capsulejay at 8:45 AM