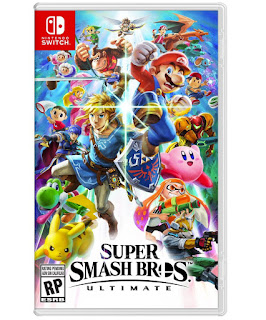 The arrival of a new Smash is always a major event in a console generation, and the latest edition, Smash Ultimate for Nintendo Switch is no exception. With the massive scope of this game and the constraints holiday time puts on my gaming sessions, I’ve only just scratched the surface of this cross-over fighting behemoth. Since this time of year makes it tough to coordinate multiplayer sessions with friends, my time with Smash has been devoted to the game’s new single-player campaign: World of Light.

Regardless of which mode you pick, the player is limited to only a tiny selection of the game’s 70+ character roster. In Classic mode (i.e. the arcade-style single-player mode) and multi-player, only the original eight characters from the N64 game are available the first time you load the game. In World of Light, the only starting character is Kirby. As a result, the main incentive for progressing through the Classic and World of Light campaigns is to unlock the rest of the characters.

Some thoughts on World of Light:
So far, we’ve been pleasantly surprised with how robust this single-player campaign is in this primarily multiplayer-focused fighting game! After having the game for only one weekend, my wife and I have already put 9 hours into Smash Ultimate, nearly all of which has been in World of Light mode. In the coming weeks I’m looking forward to exploring the other features this massive game has to offer, so be sure to check back in the future for updated impressions or a review!
Posted by Capsulejay at 11:52 PM