The community game-along events held by the Chic-Pixel blog provide a great opportunity to diversify my gaming queue and #DoujinDecember was no exception. While the Western indie scene has been getting a lot of coverage lately, Japanese indies (aka "doujin games") tend to be a bit more obscure. For my selection for this month's theme, I picked out Helen's Mysterious Castle which was available from Playism for only $2 (US)!

Overview
Helen's Mysterious Castle is a turn-based RPG made in the RPG Maker engine. With only one playable character, the combat focuses on the strategic use of Helen's assortment of weapons. In addition to the typical attack and defense stats, each weapon has a "Wait" value that represents how long it takes for Helen to use that weapon. Since enemy attacks have their own Wait values that are displayed on-screen, managing turn time is the key part of combat strategy. From a story standpoint, Helen's Mysterious Castle drops the player right into quest immediately, letting the player uncover the context for the action later.

Cons
Despite some rough edges, Helen's Mysterious Castle was a satisfying little RPG. I'd recommend it to anyone looking for something a little different in the JRPG genre, or to anyone interested to check in on the modern RPG Maker scene. 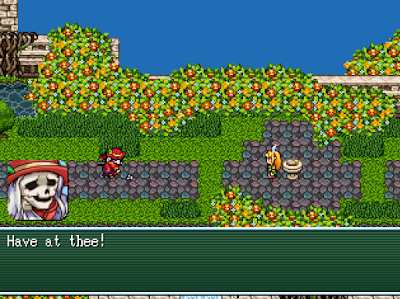 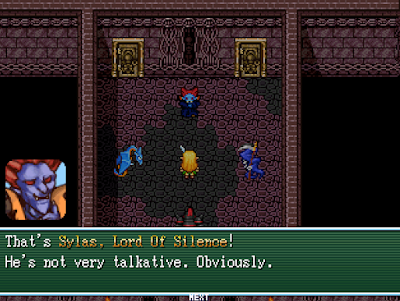 Posted by Capsulejay at 3:30 PM