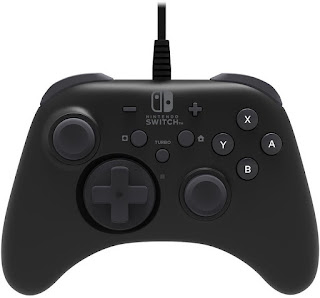 Even though it’s less than a year old, the Switch already has a great selection of local multiplayer games. The problem this presents is that Switch controllers are expensive. Since I already have a Pro Controller and a pair of Joy-con, I decided to look at low-cost options for the seldom used 4th player’s controller. While I considered the 8bitdo controller I mentioned in my previous accessory post, I wanted to see if I could go even cheaper. That’s when I found Hori’s Switch controller, the Horipad, on sale for $20 (marked down from $30). Since I’ve had good experiences with Hori products in the past, I decided to jump on the opportunity to get a spare controller for almost a quarter the price of the official models.

Right off the bat, I should mention that this controller is cheap for a reason; it’s a wired controller and it excludes most of the special features of the Joy-con and Pro-con. The Horipad has no amiibo scanner, no motion sensors, and no rumble motor. Thus, what you end up with is a very old-school basic controller hooked up to your futuristic hybrid console. The Horipad has a similar size and button layout to the Pro Controller but feels much lighter. The buttons have a nice springy response and the distinct shapes of the plus/minus buttons compared to the home and screenshot buttons make them easier to tell apart by feel when compared to the Pro-con. The analog sticks are taller than those of the Pro Controller and have a little less resistance. For the D-pad, Hori made a strange compromise between the Joy-con and Pro-con design: the traditional-looking D-pad can be popped off of the controller to reveal four individual directional buttons underneath.

To test out the Horipad, I ran it through a gauntlet of games of different genres. Here’s how it fared in each:
I didn’t have any 2D platformers or fighting games on Switch to test out this controller with, so I plugged it into my PC in order to touch on these two genres. The Horipad is detected as a direct-input controller in Windows, so it works with many games but has nowhere near the plug-and-play support of an X-input (i.e. Xbox) controller. For many X-input-only games, keymapping software would be needed to use the Horipad. (This is also the case when connecting a Pro-con to a PC). The one genre I wasn't able to test was first-person shooter. Based on playing around with Link's bow in Breath of the Wild, I'm thinking this controller would fair decently in an FPS but players using a Pro-controller would have an accuracy advantage.

Overall, I was pretty satisfied with this budget controller and would consider purchasing one as a spare controller to be a no-brainer. For use as a primary controller, your mileage will vary based on your situation and game preferences. The 10-foot (3 meters) USB cord will be a deal breaker for many (I used a USB extension cord to give myself enough slack when sitting on the couch). I would also say this controller is a no-go for people who primarily play games that require 8-directional D-pad input or motion controls. For everyone else, the Horipad is a very cost-effective upgrade from using the Joy-con but it doesn't quite reach the Pro Controller's level of excellence. If you want the best possible experience and can spare $70, the Pro Controller is still the way to go, but it's hard to deny the bang-for-the-buck factor of the $20-$30 Horipad.

CAUTION (maybe): When testing this controller I found that my cat could not resist attacking and biting this it. She's never shown any interest in biting my Xbox 360 controller, Wii U gamepad, or other Switch controllers. It may just be that I have a weird cat (highly probable), or perhaps Horipads are manufactured in a facility that also processes catnip... who knows? Just don't say I didn't warn you. 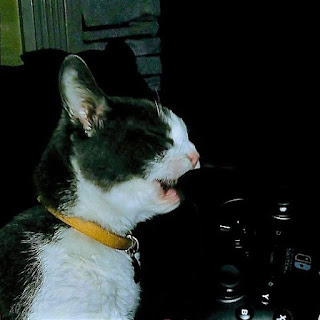 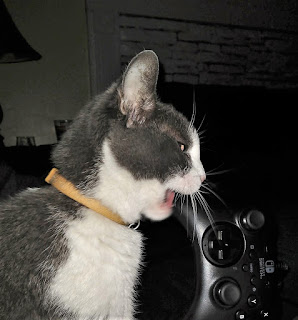 Posted by Capsulejay at 9:46 PM