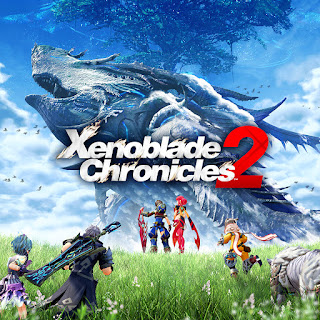 A fantasy epic that won't be everyone's cup of tea

It may have taken me almost 100 hours, but I've finally reached the end of the Nintendo Switch's newest massive JRPG, Xenoblade Chronicles 2. For the most part, the points I noted in my impressions post were applicable to the game as a whole, so this review is going to primarily focus on observations I had once I was fairly deep into the game.
What Xenoblade Chronicles 2 ultimately offers is a fun but not necessarily deep story, a complex and satisfying combat system, and an interesting world to explore but it puts a lot of obstacles in your way to enjoying these things. I came away feeling positive about Xenoblade Chronicles 2 even though I think the game would have benefited from more development time to smooth things out. RPG fans with patience (or lots of free time) who also love anime will find themselves hooked by this game. Everybody else might find it just a little too daunting, clunky, and time consuming to see all the way through.

Score: ⭐️⭐️⭐️⭐️
Completion Time: 94 hours (Main story and about half of the side quests)