Skullgirls is an indie fighting game that I’ve been hearing people talk about for years and I decided that since January is #FightingGameMonth, it was finally time to give it a shot. (It also didn’t hurt that the game was on sale for $2.99 on Steam.) While I used to dabble in fighting games periodically, I never latched on to any particular game long enough to become truly competitive and it’s been many years since I’ve played a traditional 2D fighter. Here were my takeaways from the game and my return to the genre:
The game features a jazzy soundtrack that goes well with the 1940s motif. The fight announcer is corny and over-the-top but that suits the game well.
Overall, Skullgirls is probably a great game for people who love completive fighters like Marvel vs Capcom. However, there might not be enough here for casual players like me unless they want to devote the time to gain mastery. I enjoyed my time with Skullgirls and appreciated it from a creative standpoint, but after a few hours, I was ready to move on.

Note: This review is based on the original version of the game. There is an enhanced “Second Encore” version that has more content but I haven’t had the chance to try it. 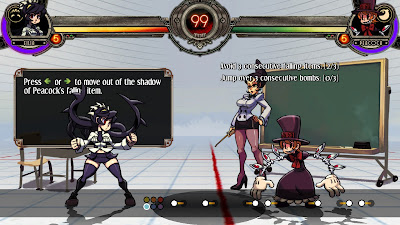 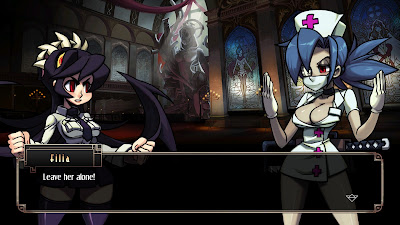 Posted by Capsulejay at 6:46 AM