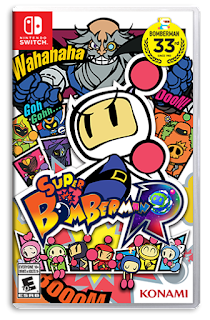 Bomberman lands on Switch... and immediately twists his ankle

I've been a fan of the Bomberman series since I first played Bomberman 2 on the NES, so you'll be hard-pressed to find somebody who wanted this series to make a triumphant return on Switch more than me. Unfortunately, my experience with Super Bomberman R made it abundantly clear that Konami did the bare minimum when attempting to revive this lapsed franchise.

While many players get into Bomberman purely for the multiplayer mode, I've always had a fondness for the single-player campaigns, especially in the N64 and Gamecube era. Much to my disappointment, the campaign was an extremely barebones collection of five worlds with nine levels that seemed to be an attempt at recreating the gameplay of Super NES Bomberman but with 3D graphics. Super Bomberman R does not succeed at all in this unambitious goal. While the 3D graphics provide a somewhat interesting extra layer of depth and verticality to the traditionally flat grid-based level designs, these features often obstruct the view of Bomberman and enemies since there's no way to move the camera. The biggest issue with the campaign, however, is the continue system. To use a continue costs in-game currency (gems) with the cost of a continue being based on the difficulty level you're playing. Using a continue provides nine additional lives and allows you to continue playing from the exact moment at which you lost your last life as if nothing happened. If you lack the gems to use a continue, you get sent back to the beginning of the world you're currently playing, which could mean having to replay up to nine levels. Thus in the first case, a game over has almost no consequences at all, and in the second case, the game can be especially punitive. The difficulty options don't help matters much since on easy the continues are meaninglessly cheap, and on medium or hard they're so expensive that a few too many mistakes at the beginning of the campaign could leave you stuck and unable to earn enough gems to buy continues for the entire rest of the game. I found this issue to be so glaring that it killed much of my motivation to proceed with the campaign.

There was one feature of the campaign that offered a momentary glimpse of Bomberman's former glory: the boss battles. The bosses take the form of giant robots with weak points to exploit and patterns to learn which was a welcome change from the more ho-hum standard stages. These dynamic battles reminded me of what it was I liked about Bomberman to begin with. I should also mention that the campaign's cutscenes, while obviously cheaply animated, have a very Saturday-morning-cartoon vibe that wasn't my thing, but I could easily see appealing to children, who are presumably the target market for this game. I also kind of dug the corny electro-pop music that crops up at various times throughout the game.

The multiplayer options come in two flavors: co-op campaign and battle mode. Playing the campaign as a co-op experience comes with all the same problems of the single-player mode but with the added frustration of friendly fire deaths. This only exacerbated the issues with the continue system and quickly proved to be a non-starter for my wife and me; we played through the first world in co-op and then I powered through the remaining four worlds on my own. The battle mode is fairly competent but adds nothing new to the multiplayer Bomberman formula. I bet it would still be a lot of fun to play with four players locally, but I lacked the necessary extra Joy-con (and people) to try it out. The online battle mode initially ran so poorly it was practically unplayable but was patched over a month after release, upgrading it to a choppy but manageable state. Even with the patch, it didn't hold my interest for long.

It really pains me to give a Bomberman game a negative review and I tried hard to find some positives in the package, but as a full-priced release, I just can't forgive Super Bomberman R's numerous flaws. My only hope is that after dipping their toe in the Switch development water with this game, Konami will come back later with better installments of Bomberman and their other classic franchises.

Score: ⭐️⭐️
Completion Time: About 5 hours (campaign on easy mode and a handful of multiplayer matches)

P.S. This is the first time in years I've traded a game back to a retailer so soon after its release. I put the cash towards a Switch carrying case and some eShop titles that I'll be covering in a future post.