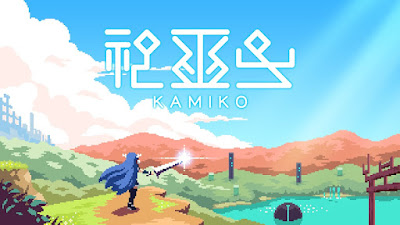 After the grand undertaking that was Breath of the Wild, I found myself craving a focused bite-sized experience and Kamiko fit the bill nicely. This cute pixelated indie title offers four stages that play like a series of simple 2D Zelda dungeons. Each stage has the same objective: Find and activate 4 spirit gates in order to gain access to the boss room; accomplishing this task involves navigating branching corridors, clearing enemy kill rooms and solving light puzzles (i.e. finding keys and flipping switches). I finished my first play-through in an hour and sixteen minutes, which for the asking price of $5 (US), is perfectly fine by me. You may have noticed I specified first play-through; this is because a major emphasis of the game is replayability.  There are three different characters to choose from at the beginning of the game (a swordswoman, an archer, and a boomerang-user), and because the gameplay is so light and snappy, I ended up replaying the game with all three. Each character played differently enough to change the way I approached combat, even though the level layout and enemy distribution are the same regardless of the character being used. That being said, it would have been nice to see each character's move set expand or weapons upgrade during the quest, but in this case, you finish the game with the same gear and abilities that you start with. There are, however, expansions to the HP and MP meters that can be obtained, but these aren't as fun as some new moves would be.

There are two gameplay mechanics in Kamiko that could be sticking points for some players: enemy respawn rates and carrying keys. In true NES-era fashion, enemies in Kamiko repopulate a room as soon as you leave it. Thus, you can clear a kill room, advance to the next room and immediately re-enter the kill room to find that the enemies have already respawned. Part of why this occurs is that opening treasure chests, activating spirit gates, and using charge attacks all consume MP and the only way replenish it is to kill more enemies. Thus the respawning is necessary to prevent you from getting stuck, but the respawn rate does seem to be a bit excessive. The respawn rate closely ties into the key carrying mechanic. When the protagonist is carrying a key to a door, she is incapable of using her weapon and if she gets hit, the key returns to the chest that it came from. In most cases, the distance that the key needs to be transported is relatively short, but some enemies will inevitably respawn in your path, thus if you're not good at planning your route and dodging enemies, you may have to go back for the key several times. In the last stage, this does get somewhat tricky as there may be several obstacles and rooms between the key and its associated door. For me, I quickly developed a knack for mowing down waves of enemies when armed and sneaking around them when carrying a key, so I found these mechanics to be more challenging than frustrating, but I could see how some players could get discouraged.

From an aesthetic perspective, I found the colorful 8-bit graphics to be very charming and the music to be very catchy in a classic retro game sort of way. Kamiko has an extremely limited story, but for a game like this, I have little interest in watching long cutscenes or reading lengthy dialog anyway.

Overall, I think those looking for a quick action/adventure game will be very satisfied with their $5 purchase. The extra characters and speed-running potential provide nice incentives to come back to Kamiko after blasting through it the first time. However, those that get frustrated easily with old-school mechanics or are looking for something with significant depth may end up not seeing the appeal of this game. After playing though Kamiko, I'd definitely like to see a longer, more robust adventure from this developer in the future.