A party in a digital box

Over Mother's Day weekend, I was having family over and looking for a game that could entertain everyone regardless of their gaming skill level, thus the release of Jackbox Party Pack 3 on Nintendo Switch couldn't have come at a better time. Each entry in the Jackbox series consists of a set of humorous trivia-based party games in which players use their cellphones or tablets a controller. Here's a brief rundown of the five games included in Park Pack 3:
While in my household, Trivia Murder Party and Tee K.O were the clear favorites, I would still say that Party Pack 3 offers a pretty well-rounded and consistent collection of party games and surpasses its predecessor in overall quality and fun. The fact that Jackbox 3 uses cellphones as controllers is both one of its greatest strengths and weaknesses. On one hand, the fact that I didn't have to go out and spend a fortune on extra Joy-con in order to get the whole family playing was a real blessing. On the other, the inherent inconsistencies associated with everyone using different personal devices did create some disruptions in the fun (system updates, varying device performance, receiving calls mid-game, etc). Overall, these minor issues didn't detract significantly from the experience and the game succeeded in keeping my whole family (ages 28 to 55) entertained for many hours over the course of the weekend. The package also includes a "family friendly" setting in the options menu in the event that there are younger players joining in, but I didn't have an occasion to test this for myself. Overall, I'd highly recommend Jackbox Party Pack 3 to anybody entertaining guests of mixed gaming skill. 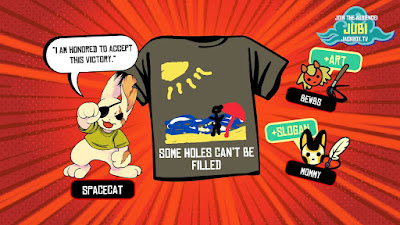 Posted by Capsulejay at 8:44 PM