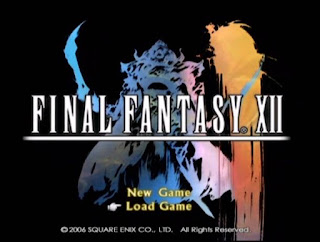 Of all the games in my backlog, Final Fantasy XII has probably been in there the longest. I played about half-way through it a little while after it was released, almost a decade ago at this point, but ended up having to put down and haven't been able to get back to it since. Dropping back into the middle of such a long and complex game and trying to find my bearings after so much time has passed seemed to be such a daunting task that I found myself repeatedly shuffling the game backward in my queue. However, a great series of posts in one of my favorite blogs inspired me to start the game fresh from the beginning and to run the game on my PC via emulation rather than dusting off my old PS2 (click here for more info). After applying some up-scaling effects and filters, the game looks absolutely amazing. If you're interested in this and other great geeky topics, I'd highly recommend checking out the A Green Mushroom blog by Void.

I'm about 15 hours into Final Fantasy XII so far, and I've really been enjoying it. I somehow did not initially pick up on all the Star Wars parallels in this game, but now that they've been pointed out to me, I can't un-see them. This is by no means a complaint, though; I've always felt that Star Wars made for a better game setting than movie setting, and a game that is essentially Final Fantasy meets Star Wars is pretty much the ultimate dream mash-up of childhood favorite franchises. In addition to the Star Wars connection, Final Fantasy XII almost seems to have biblical elements to its themes that make me think of the Roman occupation of Jerusalem, but maybe that's just me.

As for the gameplay, it's held up pretty well. However, this time around I've made an adjustment to how I play the game that's greatly enhanced my enjoyment; I assigned each character a defined role. The game's License Board system tends to cause each character to become an interchangeable jack-of-all-trades, so I decided to create some self-imposed rules to keep each character unique. While I'm aware that there's the International Zodiac edition of this game that has rigidly defined character classes as well as some self-imposed class system challenges, I decided to take a role-player's approach, basing my builds on the personality traits of each character. See below for an example character sheet I made to illustrate the idea:

I've found that using this make-shift system has added an extra strategic layer to battles, but still has enough flexibility to keep me from getting stuck and having to grind my way out of a tough situation. Unless something really jumps out at me, I'm going to hold my in-depth thoughts on the other aspects (mechanics, story, music, etc) of Final Fantasy XII until I write my review once I finish the game. It'll take me a few weeks to get to that point, so expect my next few posts to be about smaller games I play on the side.