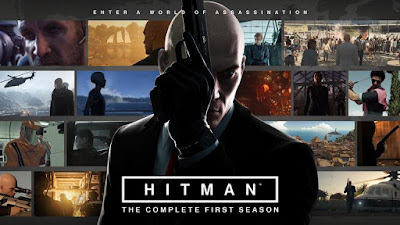 I've been a fan of the Hitman franchise since Hitman 2 (i.e. since 2002), and it's a series that I've always enjoyed but has generally seemed to fly under the radar of the gaming community in the US. That all seemed to change with the start of the episodic run of the newest entry in the series, Hitman Season 1, which dominated the conversation of many gaming podcasts, YouTube channels, and gaming awards in 2016. I received the complete first season from my wife as a birthday present after all the episodes had been released, and found myself very curious to find out what had changed with this new game to bring Hitman into the spotlight.

I quickly found that this Hitman game has all the traditional trappings of the series:
It turns out that what sets Hitman Season 1 apart from its predecessors all boils down to one thing: accessibility. While the on-ramp for the Hitman series has generally gotten less steep with each entry, Hitman Season 1 offers an unprecedented level of guidance to the new player. In addition to a fairly thorough tutorial stage, every mission in Season 1 features a new hint system called "Opportunities". Once discovered within a stage, each opportunity provides step-by-step instructions through one possible route to assassinating a target. These opportunities come complete with explicit on-screen text instructions and map markers. Further hints are provided by the game's challenge list which calls out specific assassination methodologies (e.g. drown the target, kill him with the antique canon, etc).  Also, the level design language of Hitman has never been more codified: places to hide bodies are very obvious and objects that can be sabotaged are clearly marked. As a result of all these new player-friendly features, a completely inexperienced Hitman player will be up to speed and earning Silent Assassin ratings in no time. It should also be said that most of these hint systems can be tweaked or disabled in the options menu, but are fully activated if using the default settings.

As a result of all the accessibility upgrades, it was pretty clear that Season 1 is a great game for new players, but what about for Hitman veterans such as myself? In a nutshell, experienced Hitman players will find that Season 1 plays very much like Hitman Blood Money, but with the control scheme and UI of Hitman Absolution. Before I realized that the hint systems could be toggled, I found that the combination of opportunities and challenges had transformed the gameplay. Traditionally, a Hitman mission was a process of discovery and figuring things out, but this new guided experience started to feel like a matter of simply checking items off a to-do list. Once I disabled these features, however, I was  able to get back into the enjoyable classic Hitman groove. That being said, seasoned hitmen and hitwomen may find that Season 1 doesn't offer much new in terms of gameplay innovation, mission structure, etc, but that every facet of the core gameplay is very smooth and well-executed.

Overall, Hitman Season 1 is a fantastic game for new players, and reliable comfort food for series veterans. I did come to realize that I probably would have enjoyed my time with the game a little more if I would have disabled the hints sooner and played through the episodes as they were released rather than blasting through the whole game in succession, but that's my fault, not the game's. It is my hope that Season 1 is simply laying the foundation for more innovation and varied gameplay to be introduced in Season 2. Only time will tell where this new episodic format will go, but for me, I found enough to like in Season 1 to be more than willing to sign up for Season 2 once it's formally announced.

Score: ⭐️⭐️⭐️⭐️
Completion Time: 46 hours (Silent Assassin rank on all missions, plus completing most challenges)
Posted by Capsulejay at 8:45 AM