While the Nintendo Switch may be the best portable game system on the market right now, sometimes when I'm on the road I want the simplicity of not having to pack a gaming-specific device, especially if I know my sessions are going to be short. That's where mobile games come in. Unfortunately, many popular mobile titles are so bloated with microtransactions, gatchpon mechanics, data-sucking content updates, and other games-as-a-service features, that they just don't make sense to pick up and play while traveling. On a few recent trips, I managed to put together a handful of fun mobile titles that were an exception to this rule. Here's some info and impressions on each: 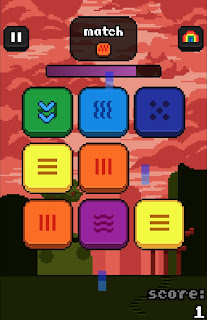 We’ll start with the most simple of this set, Rain Blocks. This is a basic block-sliding puzzle that builds in complexity, introducing powerups and new types of blocks, as you play. This is no-frizzles puzzle game is my go-to mobile game for when I want to immediately jump into gameplay and engage my brain for a short session. However, in Tetris-like fashion, sometimes I get on a roll and end up turning these short sessions into longer ones! Rain Blocks also sports great music by former Mega Man composer, Manami Matsume. 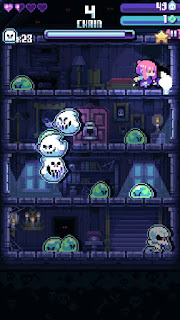 Going up in complexity level, we have Candies 'n' Curses. While I’ve heard some call it a platformer, to me it’s more reminiscent of arcade-style games like Joust, Elevator Action, or Woah Dave. Running around and bashing as many ghosts as possible is oddly satisfying and since it has some minor Rouge-like mechanics, each time I play my character is a little stronger and I can advance a little further into the haunted mansion. The game has a minimal story that reaches some sort of conclusion if you manage to make it far enough, but it will probably be quite some time before I get that far. This game also features some great sprite work and a catchy soundtrack. 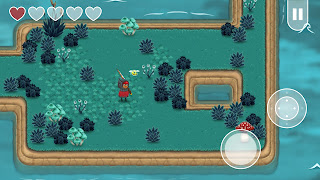 It’s pretty clear from the get-go that this game is inspired by The Legend of Zelda. However, instead of a big sprawling world, Skyfish breaks Zelda-like gameplay down into bite-sized levels that play like small dungeons. Since the gameplay is just a succession of condensed dungeons, you'll be doing a lot cycles of switch flipping, sword slashing, and block sliding, which I found works well for short sessions but can feel repetitive if you're trying to kill more than thirty minutes or so. However, I'm only about a quarter of the way through the campaign, so there a possibility that more variety will be added later in the game. Also, I have to commend this game for managing to make maneuvers that are typically associated with a controller (sword swipes, firing a hookshot, etc) feel pretty smooth with a touch screen. 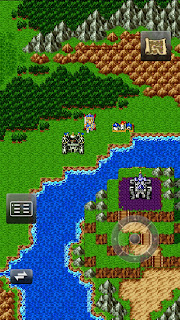 This RPG classic likely needs no introduction. Square Enix has put together a solid mobile remake of the original Dragon Quest (aka Dragon Warrior). The touch screen controls took a little time to get used to, but once I had adjusted, it was like I was a kid again hunched over his Gameboy Color. Something that jumped out at me in this version is that Square elected to keep the "old-timey" dialect associated with the NES version of the game, which can be equally nostalgic and (possibly unintentionally) funny. This is a very grindy RPG with very minimal story, but I actually like that in a mobile game since I feel like I can quickly get into the game, make some progress, and then get back to what I was doing in the real world.

Note: All info on this page is based on the Android versions of these games, but the iOS experience should be similar. Prices are Google Play prices in US dollars.
Posted by Capsulejay at 8:13 AM