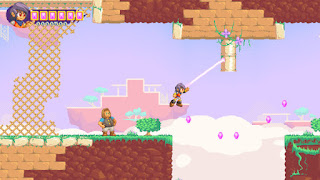 After having been delighted by Galaxy Trail's Sonic-like platformer, Freedom Planet, I've been eagerly awaiting its sequel. While it appears that Freedom Planet 2 is a still a while off, in the meantime, the game's developer has been supporting a smaller indie project called Grapple Force Rena.  A demo for this previously unknown game recently became available on Steam, so I decided to give it a go.

Much like Galaxy Trail's Freedom Planet, Grapple Force Rena (GFR) has the look and feel of a Sega Genesis game. However, while Freedom Planet drew inspiration from Sonic, GFR feels like a 16-bit pastel-colored cartoon take on Bionic Commando with a touch of Treasure influence thrown in for good measure. As would be expected from a Bionic Commando-like (I have no idea if that's a real expression), this game is all about its grappling hook mechanic. Rena can fire her hook in any direction to swing, pull, rappel, and grab any surface or enemy. Thankfully, for a game that is so singularly focused on a locomotion mechanic, GFR really gets the feel of the movement right. It took me a little while to find the control scheme that worked for me, but after a few minutes, I was swinging Rena around like Spiderman. GFR also sports some cute pixel art and a cheerful soundtrack.

The demo of GRF is pretty generous; it includes five stages comprising the first world of the game. I was surprised to find that each of the five stages had a different structure rather than just simply trying to get from point A to point B. Here's a quick breakdown:
While this early demo didn't exhibit quite the level of fluidity, speed, style, and polish that I saw in Freedom Planet, the solid mechanics at its core were enough to keep me interested. Previews of some of the upcoming parts of the game show a lot of promise, so I plan on checking in on this game again later as it develops.

If you're interested in trying the demo for yourself, you can find it on Steam or the game's website.