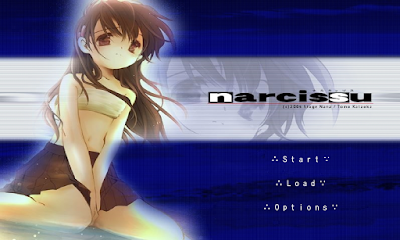 Background:
This month, as part of Chic Pixel's #VNNovember Community Game-A-Long event, I'm going to be trying out a couple of visual novels. For those unfamiliar, a visual novel is software that tells a story primarily through static images and text (occasionally accompanied by voice acting). I use the word software here rather than game because while some visual novels involve decision-making and have winning/losing conditions, others are purely a means to tell a story and involve little or no user input.

Review:
Naricussu is a freeware visual novel for PC and Android that tells the story of a man and woman that have been diagnosed with a fatal illness. The story is primarily told from the male protagonist's perspective and describes his thoughts about his condition, his interactions with a fellow hospice patient, Setsumi, and how the two of them elect to spend their final days of life. It probably goes without saying that this is an extremely sad story and it is important that one be in the right mindset before experiencing it.

While I have some prior experience with visual novels (primarily of the adventure or dating sim variety), Narcissu is the first completely linear visual novel I have ever tried. Other than tapping/clicking the screen to advance the text, there is no input required from the user. Also, unlike most visual novels, the use of images is very limited and the graphics primarily show scenery rather than characters. Thus, this minimalist experience is much more like reading a short story rather than playing a video game. I was initially disappointed by this, but once I reframed what this experience would be (i.e. not a game), I was able to get into it.

Being a mostly text-based experience, everything hinges on the quality of the writing, which I had mixed feelings about. Narcissu initially does a great job of expressing the thoughts and feeling of its terminally ill characters and succeeded in getting me invested in their situation. However, as the story went on, the writing style and pacing often tried my patience. The author has a tendency to reiterate the same points several times. I frequently found myself saying "Ok, I get it already, let's move on." Also, since the characters' relationship is initially very awkward, there are many conversations that are primarily made of up phrases like "umm...", "never mind", or just "...". As a result, the middle of the story seemed to drag on. It is possible that some of the issues I had with the writing are not the fault of the original author, but are an artifact from translating the Japanese script to English. Making it through the mid-story slog did come with rewards, the late-story scenes pulled me back in and the poignant conclusion left me thinking for some time to come afterward.

In addition to the text and minimal imagery, Narcissu featured some audio embellishments that added to the atmosphere. The context-appropriate background music and sound effects were well-timed with the text and did much to set the mood of each scene. Also, a subtle, but effective Japanese vocal track is included for Setsumi that contributed to the strength of the ending. The male protagonist, however, is silent.

Narcissu is tricky to recommend. If you're in the right mood for a non-interactive tear-jerker of a story and have the patience to get through some writing in desperate need of an editor, you'll probably be satisfied with your experience. For me, I'm ultimately glad I made it through this visual novel but couldn't help but feel like it had the potential to be much better.

Posted by Capsulejay at 5:07 PM