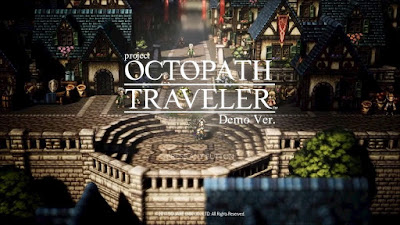 After teasing the mysterious new RPG, Octopath Traveler, over six months ago, Square Enix hasn't said a word about the game since. However, much to my surprise, not only was the game prominently featured in the September 13th Nintendo Direct, but it also had a demo released on the eShop that very same day! I immediately dove into this meaty demo, here are my thoughts on the 2-3 hours of gameplay on offer:
I finished the Octopath Traveler demo hungry to experience more of this unique Switch-exclusive RPG. As much as I enjoyed titles like Saga Frontier in the PS1 era, the lack of a cohesive narrative and quest structure often led to dead ends and reliance on guide books to make progress. Octopath seems like it will deliver on the intersecting multi-adventure premise of the Saga games but use modern story-telling techniques and structure to hold the game together in a more statisfying and complete package. 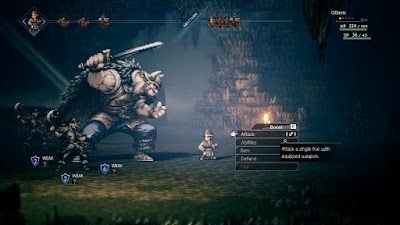 Posted by Capsulejay at 8:30 AM