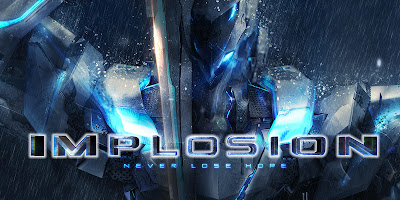 This past weekend was my first time traveling by plane this year, and as the original Nintendo Switch reveal commercial demonstrated, I knew I had to bring my Switch with me to play in the air. Since most of the recent big releases for the system are online multiplayer-focused affairs, I found myself browsing the eShop for an affordable and light-weight single-player experience to play on my flight. After having good experience with Kamiko and Mercenary Saga from Circle Entertainment in the past, I decided to pick up their newest mecha-themed hack-and-slash, Implosion Never Lose Hope. Here are some thoughts on the first few hours of gameplay:
During my travels, I was able to put about three hours into Implosion Never Lose Hope and have been pretty happy with it. It's been a fun arcadey experience that's well-suited for those times when I don't want to play something too engrossing.

Note: This post marks the 1-year anniversary of this blog! Woohoo! Many thanks to everyone who's stuck with me!