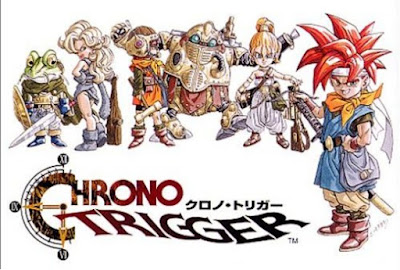 Showing up 20 years late to the time travel party

People have been waxing poetic about this game on the internet since the days of dial-up, so I’ll get right to the point: Chrono Trigger is an all-around great RPG that combines the best of Final Fantasy and Dragon Quest.

Most RPGs that I’ve played and loved have been a mixed bag of components (story, battle system, world design, etc) in which a few of these elements have been the amazing shining stars that make the game great, while the other parts just get the job done in the background. For example, the Witcher games have a really engaging plot and setting with fairly mediocre combat distributed throughout. What makes playing Chrono Trigger such a fascinating experience is that while no one aspect of it is mind-blowing, every component of it is high-quality and comes together to form an exceptionally well-rounded package.

From a gameplay standpoint, there are a couple of welcome upgrades compared to other SNES RPGs. First and foremost is the use of on-screen enemies rather than random encounters. It is really nice to be able to clear a room completely of enemies and then be able to explore it uninterrupted.  The fact that these battles happen on the main game screen rather than a separate battle screen helps make the transition between exploration and combat much more fluid. As for the battle system itself, I was initially somewhat underwhelmed by it, but over the course of the game it expanded in interesting ways and I ultimately came to really appreciate it. The “Tech” system makes party composition very important since each character's abilities interact with others differently. This had the effect of making a given set of three characters really feel like an interdependent team rather than just three individuals performing their own specialized jobs. The use of elemental weaknesses also had a little bit more depth than the traditional “use the water spell against the fire boss” trope, which was definitely appreciated. I was also glad to see that the difficulty curve remained fairly smooth and consistent throughout the entire game. Generally, every time I hit a wall with a boss, the solution was to revise my strategy rather than just grind: this is a sign of a well-balanced game. Outside of combat, progressing through the game is a fairly linear affair, but that’s perfectly fine as it helps maintain the pacing of the game. The only gameplay element that wasn’t particularly strong was the mini-games. The challenges that involved racing, timing, or precise character movement were often unwelcome obstacles to proceeding through the game that didn’t play all that well, especially on a touch-screen, and even with a proper controller weren’t particularly fun. Thankfully these sequences are few and far between.

In addition to the gameplay, Chrono Trigger is also well-rounded artistically. As I mentioned in my preview, the graphics and music are a great display of the SNES's technical capabilities and continued to impress for the entire duration of the game. The overall plot of Chrono Trigger is fairly straight-forward by modern game standards, but I'm sure it would have really stood out back in the 16-bit era. Narratively, where Chrono Trigger really succeeds is in the individual character moments. The combination of distinct character animations and strong writing during character interactions and backstory scenes really does a lot to give personality to each member of the party. In my experience, the best RPGs and fantasy/sci-fi stories make the party of characters feel like a quirky slightly dysfunction family, and Chrono Trigger absolutely nails that feeling. However, sometimes this presented a dilemma for me as only characters that are active party members get to speak during most cutscenes. Thus I was often torn between selecting party members based on combat strategy verse picking the characters I most wanted to contribute to the dialog. I realize that the game is probably set up this way for replay value purposes, but for my play-through, it meant that some of the less vocal characters like Ayla and Robo often ended up getting sidelined even though they were fun to use in battle.

After all these years, it feels really good to have finally experienced this classic game and to see first-hand why Chrono Trigger is so lauded by RPG fans. With this "gaming shame" crossed off my list, I'm definitely curious to look into more recent Chrono Trigger inspired games like I Am Setsuna and Cosmic Star Heroine, as well as the Chrono Trigger semi-sequel, Chrono Cross. That being said, this is a shaping up to be a busy year for games. Between new releases, my backlog, and the remaining items on the gaming shames list (which will be getting expanded soon), it's going to be tough to fit it all in.


PSA:
As I have mentioned in previous Chrono Trigger posts, I strongly discourage buying the Android version of this game. While it played fine for the first several hours, I eventually encountered unavoidable game-breaking bugs and had to switch to a different version of the game in order to continue. Thus I recommend checking out either the original SNES game (which is also available on the Wii virtual console) or the Nintendo DS version.
Posted by Capsulejay at 12:13 AM