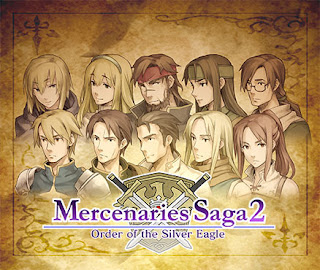 Mercenaries Saga 2 is a tactical RPG that plays somewhat like a stripped-down budget version of Fire Emblem. The game alternates between brief story scenes and turn-based tactical battles on an isometric grid battle field. While compared to Fire Emblem, the story, graphics, and music are all a pretty significant downgrade, the core game play is fun and engaging. The menus and interfaces are a little clunky, but not to the point where they significantly hamper enjoyment of the game.

The demo includes the first 5 missions of the main game, and I found myself quickly hooked by the game's quick small-scale battles. Since the full game is $5 (USD) on the eShop, I can pretty much forgive the game's shortcomings in terms of presentation and UI. With solid tactical RPG game play and such an incredibly low price, I'll probably be picking up Mercenaries Saga 2 next time I get a craving for some turn-based strategy on my 3DS.

Acknowledgement: I became aware of this game after seeing Michael Cunningham (@FinalMacstorm) singing its praises on Twitter. The man definitely knows his handheld RPGs, so when I saw him get this excited about a budget game, I knew I had to give it it a shot. You can find articles by him at RPGamer and Pocket-Console.
Posted by Capsulejay at 8:45 AM