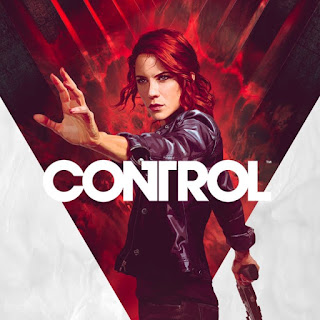 While I play a lot of indie and retro games, I've been trying to make it a point over the past year or so to keep up with some of the critically acclaimed major releases as well. Of 2019's critical darlings, one in particular that caught my eye was Control. This game was awarded Game of the Year at various media outlets including IGN, Ars Technica, and EGM.
Overview

Control is a third-person action game by Remedy Studios. The player character, Jesse, is on a search for her long lost brother which leads to her finding out about the existence of a secret organization within the US government, the Federal Bureau of Control, which investigates paranormal phenomena. Through a set of initially unclear circumstances, she becomes the leader of the Bureau, gains supernatural powers, and ends up being tasked with thwarting an invasion by an alien force called The Hiss (it's kind of a lot to take in at once). The bulk of Control's gameplay consists of exploring the massive labyrinthine headquarters of the Bureau and clearing out Hiss invaders, which usually take the form of possessed Control agents.
Combat

The key to combat in Control is successfully juggling gunplay and Jesse's psychic abilities. She has a single gun that transforms into different modes that allow it to function as a handgun, shotgun, etc, all of which have infinite ammo but share a single cooldown meter. Similarly, Jesse's powers (telekinesis, a force shield, air dashing, and levitation) all share a second cooldown meter. Managing these two cooldown meters is tough at first, but once you've sufficiently leveled up Jesse's weapons and abilities, combat feels looks and feels pretty slick. The combat is enhanced by very detailed physics modeling that affects the use of the psychic powers (especially telekinesis) and the destructibility of objects in the environment.

Unfortunately, as novel as using a mix of gunplay and superpowers is at first, Control wears the player down by frequently throwing one similar encounter at you after another. For how combat-focused this game is, there isn't much variety in the enemies or the combat situations presented; often the game just spams you with wave after wave of the same few enemies. While there seems to be a lot of options for how to dispatch these enemies, I ultimately found that a pretty simple tactic was the ideal strategy in almost every situation: stick to two of the six weapon forms and then just alternate between shooting and launching debris with telekinesis.

On the bright side regarding combat, I appreciated that the game maintained a consistent level of challenge; many games that involve using superpowers tend to let the player become some overpowered that battles become trivial. Control kept the difficulty of battle pretty high. I think having to stay on my toes helped make the combat feel meaningful despite its repetitiveness. The only downside is that some enemies have attacks that can instantly reduce Jesse to a sliver of health, regardless of her stats and upgrades; this meant for some cheap deaths if I got caught by surprise.

Control takes place almost entirely inside the Bureau's headquarters. However, due to various paranormal phenomena that bend the fabric of time and space, this building is essentially a giant Metroid-like maze. Throughout the story, events take place that change and distort the building's layout, making it even more of a labyrinth. Also in Metroid-like fashion, many areas of the building are initially off-limits until you gain the necessary keycard or traversal ability to gain access.

The idea behind Contol's setting is to feature stark contrasts between the mundane (office spaces) and the surreal (paranormal objects and events). However, I found that the mundane areas outnumbered the surreal areas to a point where I did not feel especially motivated to explore; wandering through room after room of cubicles is not terribly interesting. It also doesn't help that rewards for exploration are fairly minimal.

To the game's credit, when you manage to venture out of the office areas and into pockets of otherworldly space, they are pretty cool. These areas often feature bizarre distorted landscapes, great lighting, and a creepy atmosphere; it's just a shame there aren't more of them. There is one area in particular that shifts around you in time with the background music as you wander through (I'm being vague about this in order not to spoil it for others); this segment was the highlight of the game for me.

Another aspect of the game design that impacted exploration, was the game's save system. Throughout the Bureau building are fixed checkpoints called, of course, "Control Points". While the game autosaves the world state regularly, getting killed results in respawning Jesse at the last Control Point she passed. Unfortunately, in some areas of the map, the Control Points can be pretty far apart or in impractical locations, which results in having to retraverse sections of the map over and over if you find yourself stuck on a particularly tough fight. It also doesn't help matters that enemies in areas you've been before will respawn over time, making retraversal after a death extra punishing. While this system was manageable on the game's main story path (with a few glaring exceptions toward the end), I found that it discouraged me from exploring the map and engaging with the side missions as much as I typically would in this kind of game. For example, there's a difficult boss battle in one of the side missions that's located quite far from a Control Point in an area where enemies respawn especially frequently. I would've liked to keep making attempts at this boss but having to trek back to the boss room each time eventually lead me to abandon this questline.

The story of Control is initially very cryptic; the Bureau of Control, its mission, and the forces it's facing don't initially make much sense. However, I found that by piecing info together from in-engine cutscenes, collectible documents, and full-motion video files, I was able to make sense of it without much trouble. That being said, my level of interest in the story and world of Control waxed and waned significantly over the course of the game. The theme of government agents covering up paranormal events is one that doesn't always land with me. In the case of Control, the strong voice acting and atmosphere generally helped sell the plot, but at times scenarios it presented as dark and serious came across to me as kind of ridiculous, which caused me to disengage. It doesn't help matters that several of the scenarios in the game are coincidentally similar to a very silly children's show called Odd Squad. When a scene in an M-rated triple-A game immediately evokes images of a TV series designed to teach small children math, I couldn't help but feel pulled out of the story... however, I realize that my mental association between these unrelated things is more of a me-problem rather than a real issue with the game. (Here's a clip of Odd Squad for reference: Odd Squad)

Like many recent third-person games, collecting case files, letters, and other documents is a way that the game expands its lore. When this is done well it can be an engaging way to enrich the game world for players who are interested in it without bloating the game's story for those who just want to follow the main plot. I found that the documents in Control were interesting to collect and read, but the game makes doing so more cumbersome than it should be. For one, the inventory screen doesn't offer a way to sort read and unread documents, so each time I found a new one would then be followed by scrolling through my entire inventory trying to find where this new item ended up. The other issue I had was that each document has seemingly random segments redacted. I realize this is supposed to provide the aesthetic of the document being a "secret file" but it makes no sense in-game; why are documents kept inside the Bureau redacted? The whole point of redaction is that it's something done to a file when it gets released outside of the agency that produced it. I acknowledge this is an extremely small nitpick, but for me, it made me take these documents a little less seriously and made them harder to read.

Much to my surprise, the area where this game's storytelling worked best on me, was the full-motion video. Throughout your journey through the Bureau, you occasionally find video recordings of live actors giving agency announcements and briefings. Matthew Porretta, the actor that plays the Bureau's chief scientist, does a fantastic job of giving an initially grounded performance that slowly becomes unhinged as the game scenario gets more and more surreal. His scenes are incredibly effective at setting the tone of each phase of the game's story and I was always excited to find another videotape while rummaging through the Bureau's offices. If you would have told me years ago that one of my favorite features of a game in 2020 would be full-motion video, I never would have believed you, but here we are.
Conclusion

In all likelihood, this review probably reads as being quite negative. The thing is, Control is actually a very well-made game, and at key moments it really gets things right, making for an evocative experience. The problem is that the highlights are separated by large sections of mediocrity that give the game's various minor issues extra time to rise to the surface. As a result, my sentiment toward this game went back and forth many times throughout it's run time. Ultimately, I appreciate Control's level of quality and ambition but I am surprised that it took so many Game of the Year awards. I think players who are really into TV shows like The X-Files would be enthralled by this game. However, general action game fans will likely find that Control is good but certainly not Game of the Year material.
Score: ⭐⭐⭐
Completion Time: 23 hours (main campaign plus several side quests)

Posted by Capsulejay at 8:55 PM